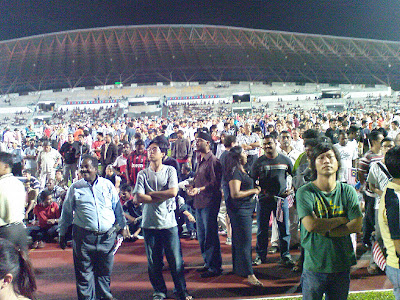 I was one amongst my fellow Malaysians at the Kelana Stadium last night. It was a Pakatan Rakyat rally in protest of the ISA and to show solidarity with all ISA detainees particularly Raja Petra, Teresa Kok, Manoharan (as part of the HINDRAF 5).

The Pakatan Rakyat speakers were Anwar Ibrahim, Khalid Ibrahim (MB Selangor), Kamaruddin Jaafar (SecGen of PAS) and the father and son team of Lim Kit Siang & Lim Guan Eng. However, another Syed (no not Hamid); Syed Ibrahim Syed Nor the Chairman of the Abolish ISA Movement (GMI) kicked off the speeches. The theme of the night was after all the dreaded Internal Security Act.

It is obvious the spectre of the ISA is merely a "symptom". It is symptomatic of a cancer that has been eating away at the very foundations of nationhood; the "carcinogens" being widespread corruption, exploitation and plunder. It is the "sword of Democles" that hangs over the heads of dissenters who dare.

Yet to the thousands of ordinary Malaysians there, the threat of ISA detention would merely be a remote possibility, although I am sure their hearts went out to the victims and their families. 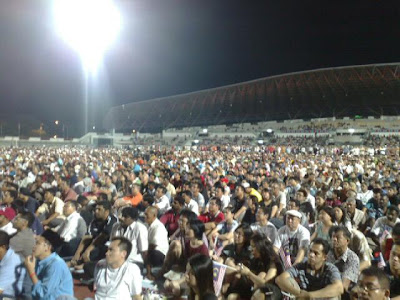 I am certain if many care to admit, rather than the ISA, they were there looking for a glimpse of hope. Hope for a future that seems becoming gradually more futile even after the great "tsunami" of GE12. Hope for a drastic change that seemed impossible before 8th March 2008. Hope for a tenable formula that will foster racial harmony for years to come rather the "divide and rule" that we are continually reminded is sacrosanct to avoid spilling the blood of our children.

No. I was not there because of the ISA per se. I risk sounding insensitive, uncaring or even self-serving saying I was there not mainly to protest the detention of my friend M. Manoharan, nor for RPK, the man I regard as the true Malaysian hero, and neither Teresa, nor the other HINDRAF four, or other nameless and faceless detainees.

I was there because of a series of NUMBERS. A collection or combination of numbers that will eventually lead to CHANGE for the better; CHANGE that will make collateral damage of the ISA and other injustices. That will ensure hope for future generations of Malaysians!

831 was when we gained independence and all agreed to work together for better or for worse under the terms and rights enshrined in the original Constitution. We have entrusted too much to too few and we have had the Constitution hijacked from under our noses.

513 was why we allowed our minds to be held at ransom. All races rightfully subscribed to the ideals of the NEP in true "prosper thy neighbor" spirit. We could accept implementation contentions but we certainly did not expect the gravy train of Orient Express proportions only for the privileged few and bread and circuses for the masses.

22 years of Mahathirism ended with two additional zeros for Vision 2020 that now seems 5 years behind schedule. We also inherited an insatiable ruling elite and a culture of patronage that ingrained corruption.

5 years of his hand-picked successor is 5 spinning years too many. We hear of 4th Floor boys, the 4K Kitchen Cabinet and who has not heard of the ambition to be PM by 40.

General Elections number 12 threw up a 140:82 proportion and the Preacher Man now wants 2 more years to risk doing more damage than the drastic RM2.70 petrol price. Yet handing over to a deputy who seems to have problems with C4 is somehow not comforting.

30 more seats is all he needs! He says he has it already but the numbers can be tricky.

But today, 15,000 (some say 20,000) Malaysians heard him promise a better Malaysia; a New Dawn for ALL and today, I will accept his promise and believe he will deliver. I can believe him because I believe he can. He believes it is his destiny to become PM and when he does, a legacy that falls short cannot be an option for the history books.
I believe him because for all the numbers that were swirling in my head at Kelana Stadium last night, I heard him say (eventhough it was merely in thr context of language) one thing: that it is NOT a ZERO SUM GAME.

Email ThisBlogThis!Share to TwitterShare to FacebookShare to Pinterest
Labels: History, My Country, Politics, Socio-Political, Trawled From The Net

Saudara Anwar brings HOPE, for that I believe he will deliver and yearn for the Dreams of all Malaysian when he does!