WTF!! Now It's The School Uniform

I did not even bother to read the article at first glance, pooh poohing it as another piece of shit that filters through the sewage system that has come to be known as mainstream media in Malaysia. Then I thought; lets see what it is about this time. Lo and behold!! It actually turned out to be a classic!

The National Islamic Students Association of Malaysia vice-president, a Miss Munirah Bahari says uniforms, especially the white blouses worn by female students in Malaysian schools are too transparent and "encouraged rape and pre-marital sex”. For that she is calling for a "review of the uniform policy so that it did not violate Islamic ideals"! White blouses violate Islamic ideals? Isn't white garb commonly used in Islamic tradition?

I believe what she is really trying to say is that girls should only be allowed to wear white brassierre under the white blouse. But then again, if that be the case then she is also saying Malaysian men are sick; no maybe she is saying Malaysian female students are sick, or better still the Education Minister is sick. I for one can only conclude that she is sick to imply that the rest of us are sick in the head!

Then I thought perhaps, maybe an old coot like me is no longer in touch with the times and I needed to give this Miss a fair break so I googled Google Images for "Malaysian school uniforms" and the pictures here are some of the images I found. It appears schoolgirl uniform in Malaysian government schools have not changed for years.

The white blouse is obviously to keep kids cooler in the tropics. What colour bras the girls wear under their blouses should not be subject to policy but any "inappropriateness" should be left for parents or even teachers to point out (pun intended).

Perhaps the thing that should be reviewed would be the entire education system that produces students of narrow minded mentality and henceforth, national associations of such students who make the country look like a nation of imbeciles (the article was afterall picked up by AFP) because of calls such as this.

I did not get aroused by any of the above pictures; maybe Miss Munirah would like to think there is something wrong with me. But I would not be able to guarantee with the following school uniform though: 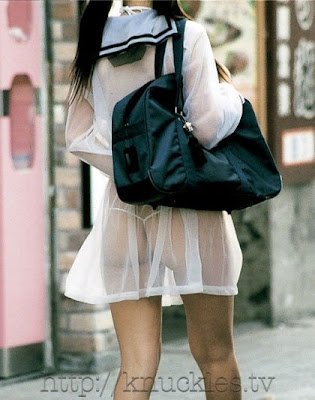 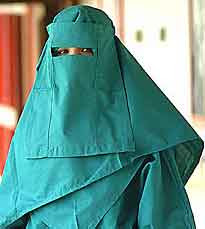 No need to wonder what Miss Munirah would think of it. If given her way, she probably would only be satisfied if Malaysian school girls uniform is like this green one modelled by the current Miss Afghanistan.

So much ado over nothing. The MOE should not have lent credence to Miss Munirah's nonsense by even responding. Why must officialdom feel it necessary to respond to such idiotic statements I wonder. As I said; leave it to the parents or the teachers (principal). It is common sense thingy; WTF!! if the bras can be seen through the blouses just don't wear the bra!! 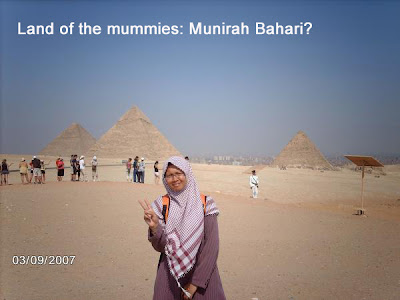 Student with ‘too transparent’ uniform can be told to wear undergarment

PETALING JAYA: If a student’s baju kurung is found to be too thin or close to being transparent, the school can demand that she wears a camisole underneath her school uniform, said Education Deputy Director-General (Schools) Datuk Noor Rezan Bapoo Hashim.

At present, it is up to the principal to use his/her discretion and decide if female students should wear an undergarment, such as a camisole, so that their bras are not visible through their white blouses.

If the baju kurung is too transparent, the school can insist that the student wears a camisole underneath,” Noor Rezan said.

She added that this issue had been taken into consideration in a recent review of the school rules.

“We are now at the final stage of studying the legal implications of the review of the school rules.”

Noor Rezan was responding to suggestions by Munirah Bahari, vice-president of The National Islamic Students Association of Malaysia, that the uniform worn by girls at government schools was “sexy” and “encouraged rape and pre-marital sex”.

Munirah said on Wednesday that according to Islamic precepts, it was important to cover up, to fend off social ills, including “rape, sexual harassment and even premarital sex.”
Her remarks drew immediate responses from several NGOs, teachers and students, who termed them “baseless” and “ridiculous.”

The Star checked with several schools in Ipoh, Alor Setar, Malacca and the Klang Valley and found that only a small number of them have made it compulsory for their female students to wear a camisole beneath their uniform.

A teacher in Puchong, however, said while it was not necessary for girls to wear a camisole to school, most of them had made it a habit to do so.
Posted by KS Cheah at 18:41 No comments:

Someone sent me this in the form of a chain email. It looked familiar and probably has gone around the globe a few times since don't know when. It is a poem apparently written by a teenager terminally ill with cancer.

Hers is a message telling everyone to live their life to the fullest, since she never will.

It is quite the poem so please read.

Have you ever watched kids
On a merry-go-round?
Or listened to the rain
Slapping on the ground?
Ever followed a butterfly's erratic flight?
Or gazed at the sun into the fading night?
You better slow down.
Don't dance so fast.
Time is short.
The music won't last.

Do you run through each day
On the fly?
When you ask How are you?
Do you hear the reply?
When the day is done !
Do you lie in your bed
With the next hundred chores
Running through your head?
You'd better slow down
Don't dance so fast.
Time is short.
The music won't last.

Ever told your child,
We'll do it tomorrow?
And in your haste,
Not see his sorrow?
Ever lost touch,
Let a good friendship die
Cause you never had time
To call and say,'Hi'
You'd better slow down.
Don't dance so fast.
Time is short.
The music won't last.

When you run so fast to get somewhere
You miss half the fun of getting there.
When you worry and hurry through your day,
It is like an unopened gift....
Thrown away.
Life is not a race.
Do take it slower
Hear the music
Before the song is over.
Posted by KS Cheah at 11:50 No comments: 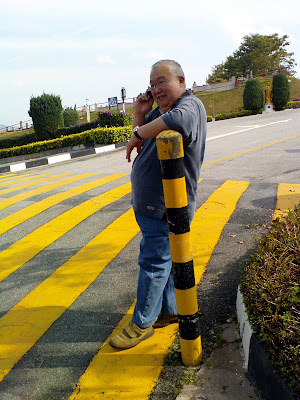 Over the last two days, I decided to take some time off to activate the Cheah family website (http://www.cheahs.com/) which had been closed immediately after Jeannie passed away.

Cousin Nick from UK, was in town for a couple of days and he wanted to visit Nirvana Memorial Park where Jeannie's remains are kept. I drove him there yesterday afternoon and I am sure his visit had somehow moved me to tinker with the family website.

There is still so much to be done but for the time being, the site will remain a memorial for Jeannie. Perhaps I should leave it to Krystyn and JJ. Do check it out! 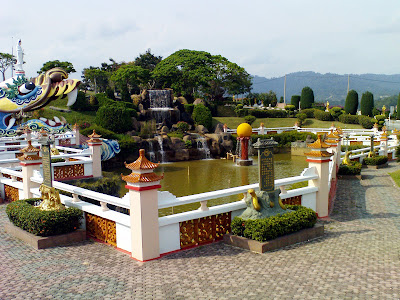 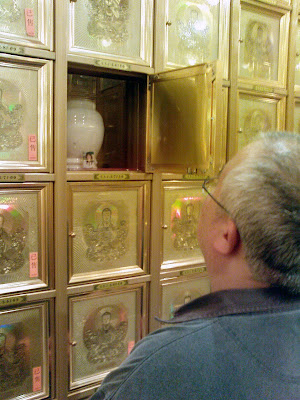 I picked this up from Jeannie's blog. It was posted almost exactly a year ago. Please read:

Parenting asks us to rise to some of the most difficult challenges this world has to offer, and one of its greatest paradoxes arises around the issue of attachment. On the one hand, successful parenting requires that we love our children, and most of us love in a very attached way.

On the other hand, it also requires that we let go of our children at the appropriate times, which means we must practice some level of non attachment. Many parents find this difficult because we love our children fiercely, more than we will ever love anyone, and this can cause us to overstep our bounds with them as their independence grows. Yet truly loving them requires that we set them free.

Attachment to outcome is perhaps the greatest obstacle on the parenting path, and the one that teaches us the most about the importance of practicing non attachment. We commonly perceive our children to be extensions of ourselves, imagining that we know what's best for them, but our children are people in their own right with their own paths to follow in this world.

They may be called to move in directions we fear, don't respect, or don't understand, yet we must let them go.

This letting go happens gradually throughout our lives with our children until we finally honor them as fully grown adults who no longer require our guidance. At this point, it is important that we treat them as peers who may or may not seek our input into their lives.

This allows them, and us, to fully realize the greatest gift parents can offer their offspring -independence.

Letting go in any area of life requires a deep trust in the universe, in the overall meaning and purpose of existence.

Remembering that there is more to us and our children than meets the eye can help us practice non attachment, even when we feel overwhelmed by concern and the desire to interfere. We are all souls making our way in the world and making our way, ultimately, back to the same source. This can be our mantra as we let our children go in peace and confidence.

I personally find it hard to face the day of letting go, but what can be more true as the above? Happy mother's day to myself...!

My life....My children.
With blessings, love and light.
In person and In spirit always. 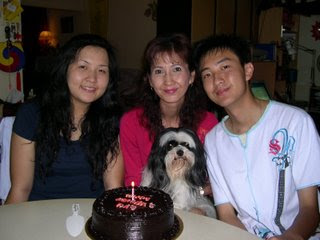 Today is Mothers Day. What more can I say?

The following message, "You Are My World", blogged by Jeannie 4 days before her demise and the slide show say it all.

You Are My World

Follow your dream,
Take one step at a time and don’t settle for less.
Just continue to climb, Follow your dream.
If you stumble, don’t lose sight of your goal.
Get on to the top,
For only on top we can see the whole view.
Can we see what we’ve done and what we can do
Can we then have the vision and seek something new.
Most of all follow your heart with faith.

Each day brings you happiness and peace,
and the strength and courage to follow your dream.
May you forget the weight of yesterday.
And focus on the path ahead,
Guided by your heart and the light of love and hope.
May you find beauty in every thingand goodness in every heart.
And may you always remember that you are blessed.

This post has got everything to do with the conversation I had with my son last night.

*We must always question - we must never take anything for granted - we have so much to re-learn just to get back to what mankind once knew as a universal truth.Before we can move forward to the next elevation of awareness and understanding - you need to look within yourself and love yourself.*

Specially for my dearest Krystyn and J.J......You are my world!

With all my Love and Blessings.