Dr Michael Newton - How It Began For Him...

A Shifting Paradigm; Spirituality Vs Religion

Religion is a structured belief system with specific doctrines to guide and govern the masses that depend on it. Structure is good for those beginning their journey to discover "god", one's own subconscious and the role one plays in the grand scheme of things. 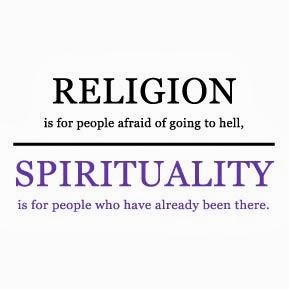 However, structure imposed by a religion, can also become very suffocating for those who desire to grow beyond the boundaries of the governing structure. Spiritual growth is limited by and can actually be impeded by structure.

Spirituality has no formal structure, save the governing of one's own developing subconscious and the "spirit" that guides that growth. Boundaries are not set by another human will and decision, but by that "spirit" which governs all things and the developing person's own subconscious. When following a spiritual path, one knows what is right and wrong instinctively through a growing relationship with the spirit that governs all.

Control
The purpose of doctrine being implemented within a religious organization is a means of providing "structure" and guidance, yes, but it is also meant to control the masses. Rules that are established within a religion are designed to keep the masses in line through a reward and punishment mentality.

Followers are rewarded for keeping the rules by being told they will go to heaven, or reincarnate, or even progress to enlightenment. However, if they fail to keep the rules then they are threatened with the fear of punishment by being sent to hell, or imprisoned in a quasi dimension, or failure to reach enlightenment. These rules of punishment are designed to play on the fears of the masses, thus keeping them under control.

Spirituality provides a freedom to explore and experience according to one's own personal journey. Unhindered by learning and following a long list of rules, one can focus on building a deeper relationship with the spirit that is in all things and governs all things. Because there are no man-made rules to keep, one can seek out knowledge, understanding and experience with the spirit anywhere, anytime and with anyone.

Division
This is, by far, the greatest difference between religion and spirituality. All religions divide people into those who believe and follow their set rules and doctrines, and those who don't. The ones who don't are considered enemies to the faith and thus enemies of the "god" of that particular religion. People who believe differently may be tolerated in a superficial way, but the doctrine ingrains the idea into the minds of its masses that these people are "ungodly" and not really a part of their faith.

Practically every war that has produced immeasurable grief, suffering and death has been waged either over religion, or with a very strong underlying religious tone. People across the planet are segregated into their separate religious belief systems and the people of each system are not fully trusted by the others. They might proclaim love for all, but the underlying truth is that if they offend my belief then they will be ostracized and punished.

Spirituality believes and participates in the idea that the energy (or life) of "god" is in all things and, therefore, all things are considered to be precious and valuable assets to one's spiritual growth. Regardless of culture, color, background, or belief system, the encounter one has with another is a learning experience to be cherished.

The foundation of spirituality is that all people, and even all things, are filled with a "god" energy that is attempting to propel everything forward in a constant state of spiritual progression. One quickly realizes when following a truly spiritual path that every situation in one's life has a valuable purpose and that one really has no enemies. There are only lower and higher levels of progression, just as there are various levels of classes and learning achievements within a school. All are on the same path to "heaven" or "enlightenment".

Peace on earth will come through the masses throwing off the confining chains of religious doctrine and learning to count all things as precious. When this is truly and deeply believed AND practiced, it will change the world as we will no longer look at others as enemies, but as simply students of "god" at different levels of progression. We will stop fighting and start helping those below us and learning from those above us. All will be one. True love will rule.
Posted by KS Cheah at 15:39 No comments:

2013 Bledisloe Cup to All Blacks Again

In The Land Of Endless Possibilities, Altantuya Was A Figment Of Imagination

Can't really say I disagree with the appellate court on this one. It seems to be saying its hands are tied because both the trial judge and the  prosecution fcuked up. Congratulations to those who came up with the whole strategy and on the great coordination and foresight that went into the whole process. Now I have no doubts our troubled economy can be fixed easily too.

Altantuya did not exist in Malaysia since there is no immigration record of her entry. Therefore, no one could have killed her in Malaysia and no one did. The appellants had no direction nor motive to commit murder. Don't know whether wanna laugh or cry lah!

Read this from the Malaysian Insider:

Two former police commandos were freed today after the Court of Appeal allowed their appeal and overturned their conviction for the 2006 murder of Mongolian Altantuya Shaariibuu (pic).

Azilah and Sirul were jointly charged and convicted by the High Court in Shah Alam in 2009 for murdering Altantuya, 28, at a forest reserve in Shah Alam in October, 2006.

Both were then with the Bukit Aman Special Action Squad and were in Datuk Seri Najib Razak’s security team. Najib was then the deputy prime minister and defence minister.

In their brief five-minute judgment read out by Tengku Maimun, she said the trial judge failed to consider the defence of alibi filed by Azilah.

"There was nowhere in the grounds of judgment of the learned trial judge that he had considered whether the station diary showed the presence of the first appellant (Azilah) at Bukit Aman at the material time. He cannot be or is unlikely to be at the crime scene.

"It is essential for the trial judge to address the challenge raised by the defence on the exhibits and to make a finding whether there was in fact an altercation or tampering of data and whether the authenticity of the data was questionable or otherwise.

"Regrettably, the judge failed to do so and this amounts to serious misdirection, rendering the said exhibits unsafe to be relied upon," she read from the judgment.

She said the judge had also failed to examine whether the contradictions or inconsistencies in the evidence of the prosecution witnesses were material and whether that was information supplied by the appellants or from other sources.

She concurred with the defence that DSP Musa Safri, who was then Najib's aide-de-camp, should have been called to unfold the narrative which the prosecution's case was based on.

The court also found that the trial judge made no finding on whether the prosecution had established that there was a pre-arranged plan by the appellants to commit murder.

"Looking at the whole circumstances, it is our judgment that the culmulative effect of the non-directions by the trial judge rendered the convictions unsafe," Tengku Maimun read from the judgment.

DPP Datuk Tun Abdul Majid Tun Hamzah, who appeared for the respondent, said he will be filing an appeal against the Court of Appeal's decision today.

In an immediate response, DAP national legal head Gobind Singh Deo said the appeal was allowed because of the failure to call material witnesses.

"The strongest evidence would have been who gave the instructions and to whom it was given. Can the AG now tell us who it was?" Gobind tweeted. - August 23, 2013.
Posted by KS Cheah at 15:23 No comments:

Email ThisBlogThis!Share to TwitterShare to FacebookShare to Pinterest
Labels: My Country

Dan Carter was hardly missed. Aaron Cruden has certainly come into his own since his debut in 2010. Watched this match on Astro yesterday. Better than Liverpool vs Stoke in the EPL season opener later in the day.

Watch and learn. The crap is in between the lines.

Email ThisBlogThis!Share to TwitterShare to FacebookShare to Pinterest
Labels: Innovation, My Country

Kudos to our Tigers for a spirited performance last nigh against FC Barcelona. Though we lost 1:3 I must say the Malaysian football team has improved tremendously in the last few years due in no small measure to head coach, Dato' K. Rajagopal.

Imagine if Lionel Messi who picked up a training injury had played.