Senior PKR leader reportedly caught for khalwat. The bugger, Badrul Amin Bahrum is an Ustaz! But it is no surprise; seems they are experts in matters like this. He claims he was counselling the woman who had marital problems...at 3.00 am and only two of them in his hotel room? This from a guy who once revered Anwar Ibrahim as Imam Mahdi (Redeemer of Islam). Well, so much for role models... 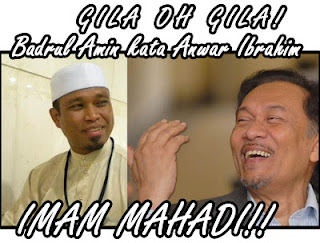 Extracted the picture from this site. With all the shit extruding from PKR, will PR still allocate the many seats to PKR for GE13? Where I vote in Ulu Kelang I would rather vote BN or PAS.
Posted by KS Cheah at 01:51 No comments:

Email ThisBlogThis!Share to TwitterShare to FacebookShare to Pinterest
Labels: Stupidity

A Choice Or Just Following Orders? Brethren Or Pig?

Email ThisBlogThis!Share to TwitterShare to FacebookShare to Pinterest
Labels: My Country, Socio-Political, Stupidity, Trawled From The Net

All That Used To Glitter...

Why does Anwar Ibrahim continue to shoot his own foot? ABU but must AI be the only option? Surely he desires to be, but does he really want to be PM? Seems to me he has been trying to lose GE13 before the fact for some time now. Bollards between two planks? Whose planks? The following blogpost by one of my favorite bloggers, KTemoc puts it down partly to pompous hubris. Maybe for whatever is going through AI's heart of hearts, vainglory and audacity is all he has left. Or could it be his means to his own end?

Enough rope to talk to ghosts

They say if you give a man (or woman) enough rope, he (or she) will hang herself.

Guess this applies to Anwar Ibrahim. I am of course referring to that millstone around his neck called Israel.
But before I come to that, I want to share with you what I believe to be one of Anwar’s weaknesses (& he has several). From my observations, I believe Anwar suffers from pompous hubris. Yup, like some Malaysian, Indonesian and Indian leaders, he likes to be treated like a deva, a Brahmin, an upper class lord, one adored and waited upon by adulating supporters, fans and disciples.
To worsen his conceit, he indeed has many adulating adorers – where those in his party or strongly supporting him are called anwaristas wakakaka. They are blind as bats when it comes to Anwar. To them, bloke can do no wrong – WTF, he’s God, and thus in their fanatical devotion they pamper his conceit, and thus reinforce his hubris and love for pomposity wakakaka.
For example, during the Bersih I walk, while venerable octogenarian Pak Haji Nik Aziz and septuagenarian Lim Kit Siang marched together with thousands of participants in the rally, Anwar in true manmanlai fashion planned his presence in Bersih via a grand entrance, to arrive in a limousine just as the rally reached the palace gates, and then like a Prince, a Maharajah, Asia’s Renaissance Man, he would assume command and hand over the Bersih I letter to the Agong, of course with an address to the international (and if they are there, the domestic) press.
None of the hoi polloi stuff for His Most Exalted Excellency.
But he was cruelly frustrated in his grand entrance by the very success of Bersih I, because the huge crowd caused traffic jams and prevented his magnificent arrival in the limousine. To circumvent the traffic jam, he had to travel to the palace gates in a less than regal manner, by riding pillion to a motorcyclist wakakaka. ‘Twas sweet-sour irony for a man who dearly loved his self importance.
But there was a consolation prize, because as he arrived, dressed in a chic light jacket (totally essential for cool Malaysia wakakaka), an anwarista rushed forward to hold a brolly over His Most Majestic head. I wonder whether the brolly was a yellow one wakakaka.
Naturally such a pompous man lapped it up when the Yanks greeted his arrival (then as a Malaysian minister) in the States with a 19-gun salute. So can you blame him for imagining and self-indulgeing in what he saw as his phenomenal World standing of mega magnificent magnitude, maybe even greater than that enjoyed by Nelson Mandala when those Yanks ooh-ed and aah-ed him?

And invariably in the political powerhouse of America, many of those Yanks were Zionists. So, is it any wonder Anwar Ibrahim felt compelled to demonstrate his allegiance and buddy-ness to his American ‘friends’ in his support of Israel.

Coupled with some poor choice of words which he used in an interview with the Wall St Journal, that he supported "all efforts to protect the security of the state of Israel", and which Anifah Aman cleverly pounced on (all efforts) as indicative of Anwar supporting even Israeli barbarous and horrendous mass military attacks on the Gazaan people, he has repulsed the PAS people who strongly support the Palestinians – just what UMNO gnam gnam desires.

Pak Haji Nik Aziz was so incensed that he demanded Anwar, who claimed to have been misquoted (hey, I thought this is an UMNO line - oops sorry, it certainly is! wakakaka), sue the Wall St Journal as proof that he was indeed misquoted. I'm not sure what has transpired since, wakakaka.

In a previous post 'Much ado about a 'shitty little country' I warned that the ‘shitty lil’ country’ (Israel) with its blood-soaked history of violence, hostilities, racial animosities, and barbarous oppressions against the Palestinians a la the vicious genocidal episodes of the Old Testament would represent to any Malaysian Muslim (UMNO, PAS, PKR) political opportunities to indict their political opponents’ lack of sympathy for their Palestinian Muslim brethrens (and, by default, friendliness with Israel as in Anwar’s case).

Thus, because Israel and its persecutions of Palestinians are highly emotional issues, a Malaysian Muslim who’s pally-buddy with much hated Israel would be evidence of his/her lack of worthiness to be a leader of Malaysia. Of course UMNO is pushing this line kau kau.

And we know that in Malaysia, with agama (religion) being one of the tripodal mantra of UMNO, naturally it would lambast and continue to lambast Anwar as an Israeli lover, one who supports even Israeli barbarous and horrendous mass military attacks on the Gazaan people.

True or false, UMNO’s accusation against Anwar Ibrahim has very strong resonance in the Heartland.

Isn’t it ironical that Anwar Ibrahim, the UMNO minister who could be said to be the principal force in Arab-izing the Malays, the Education Minister whose ministry issued an order for all school students (including non-Muslims) to doa in Muslim fashion (causing humongous distress and anger among the non-Muslim parents for the unwarranted proselytizing), a former president of ABIM, is now seen as an Israeli supporter of the strongest kind.

Anwar is caught in an Israeli net of his own ‘too clever by half’ making. When one plays footsie tootsies with Zionists, one must bear the consequences of being called a Zionist supporter, even if one is not.

So what is Anwar then?

Though MCA leaders are not the sort of politicians one wants to quote from, I have to on this ocassion and recall for you what Ong Ka Ting once said of Anwar Ibrahim.

OK, as mentioned, I don't think Ong Ka Ting is a man one wants to quote for succinct statements but having said that, Ong had been spot on when he described Anwar as a person "who talks human talk to humans and ghost talk to ghosts".

Email ThisBlogThis!Share to TwitterShare to FacebookShare to Pinterest
Labels: My Country, Trawled From The Net

Heads up from a buddy, Kevin Lim. No need for words...

Proof Of Rampant Corruption In Selangor? A Challenge To Anwar By RPK.

Why do I get the suspicion that somehow Azmin Ali loyalists are in the thick of the alleged corruption? Must be because of Anwar's apparent impotency to act.