I just realized that exactly six months has gone by since July 12th. Six months and a day ago we were still a family of 5 (including Prince Cheah) and things were so different then.
The anticipated milestones for the rest of 2007 had been JJ's SPM exams, Krystyn's 21st birthday and moving to a new home. We had great hopes for 2008 and though Jeannie was not as well as we wanted her to be, I thought her body was getting stronger. There was a sense of hope and balance in our lives (at least in my mind's eye) but little did I realize how instantaneously this hope could dissipate and how fragile this balance was. Now I am left to ponder how our own lives can change so drastically in just an instant with the last breath; the last conscious thought; the final heartbeat, of a loved one!
I remember so vividly that moment when the finality of Jeannie's passing first dawned upon me (the second the doctor at the Gleneagles A & E told me); our lives together just flashed across my mind like a highspeed intant replay. It was as if it was I who had died. The flashback came to an instant halt and I could see nothing! I could not imagine my life going forward from that point; it was as if I had lost my only reason to live. Then, reality dawned. 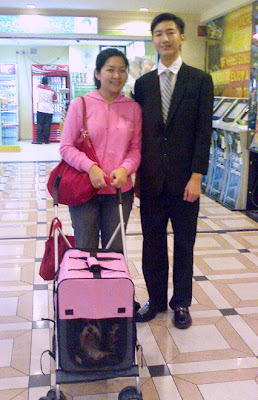 I remember huddling with Krystyn and JJ, telling them Mummy had passed away. I remember the tears; I remember their first words through the tears, that were spoken in tandem by them, "Papa, you still have us!". I remember thinking, how is it possible the two can say the same thing at the same time at such a time! I now know it was Mummy.
Jeannie always knew my own life would be wrecked by her passing. She prepared the kids as she could never prepare me for something I would never accept in my mind; the fact that she could go before me! Jeannie knew I needed the strength to continue providing the kids support they needed to grow into their own. Jeannie knew I would only be able to find that strength from the kids. She lives on so unmistakably in them that her lessons have become instinctive as the love is permanent.
I gained my composure after hearing those words from Krystyn and JJ. While the tears stopped, the pain persisted. Six months on, I now know the pain will always be there but I do not ever want it to go away. I have learnt to separate the sense of loss from the feeling of being lost and while the sense of loss must always remain, I am determined to get out of the wilderness. 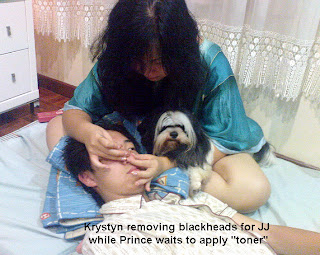 Now, 2008 is upon us. JJ has sat for his SPM and awaiting the results, Krystyn turned 21 and we will be moving to a condo after Chinese New Year. For a while, we were a chair missing a leg, still able to stand but unstable; now we are a three legged stool, more stable but nevertheless, only a stool. For a while, we were a play missing its main star but now we are trying to write our own scripts within the same storyline. Even Prince who has for the last 6 months been terribly hot-tempered with his groomers, has calmed down and stopped biting them.
I wonder how many six months there are left in my life, but that is not important. The phrase "Never take things for granted" never held more meaning to me and I will try to live the rest of my days as such. My oft repeated statement these days is, "I have the best of both worlds; I have my kids here and when I go, Jeannie will be waiting for me there!"
Posted by KS Cheah at 15:26

Email ThisBlogThis!Share to TwitterShare to FacebookShare to Pinterest
Labels: Family

I read this posting, I realized, there are still tears in my heart....

May the almighty bless you and your family.

"It is cruel to console another for a sorrow a man has not himself experienced."

I read this somewhere and it has some truth to it.

This was written with a lot of heart! Thank you for the link.

Dear Lita, agreed there is some truth in that but people who try to console another mostly do so with good intentions.

However, as someone put it; "the road to hell is paved with good intentions".