Media reports say that the Political Secretary who was arrested is Hasbie Satar. From what little I know, in Malaysian politics the pol-secs are usually also fixers, "fund raisers" and trusted bag men. 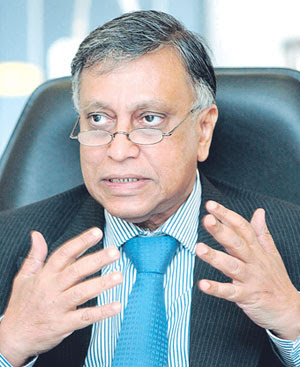 The media also seems determined to keep readers who do not as yet know, guessing who Hasbie's boss is. Anyway, by now it is already common knowledge that his boss is none other than "the great" Nor Mohamed Yakcop, Minister in the PM's Department in charge of the Economic Planning Unit.
The following report in The Star says the guy amassed millions in just a short time.

Certainly the millions is not from his gaji so who has been paying him? Who in his right mind would pay someone millions unless the guy can deliver and has been delivering. The next question is, what did he paid to deliver?

But wait a minute! A pol-sec is only a pol-sec; what authority does he have to make decisions that seemingly are worth millions? He has none, and as was reported, he was the middle-man.
Perhaps the MACC should look higher up the food-chain.
**********************************************
Sunday February 14, 2010
Pol-sec held with bundles of cash in his apartment
By M. SIVANANTHA SHARMA
newsdesk@thestar.com.my
BUTTERWORTH: A political secretary to a senior minister was detained by the Malaysian Anti-Corrup tion Commission (MACC) — with RM2mil in cash.
It is learnt that MACC officers from Putrajaya raided an apartment in Teluk Air Tawar at 3.30pm on Thursday and seized the cash in bundles of RM5, RM10, RM50 and RM100 notes.
A 4WD vehicle registered under the name of a Pulau Tikus-based company was also seized, along with a BMW registered in the name of a person from Sarawak.
It is unclear where he got the money from and why he had kept such a large amount of cash.
It is also learnt that the political secretary’s bank accounts have been frozen to facilitate further investigations.
The Star had reported on Dec 13 last year that MACC was investigating the political secretary, who was said to have amassed millions of ringgit in properties over a short period of time.
It was then learnt that investigators had obtained an order to seize and freeze several of his properties — including luxury cars and houses.
The report said the commission’s seizure list included at least four luxury cars and four houses. It also said the commission was investigating the purchased properties — all in the Klang Valley.
The report also quoted sources as saying that the investigators had identified several other people linked to the case and would also be calling them soon to assist in investigations.
The sources said a special team from the commission’s Putrajaya office started investigations following information that the political secretary was living well beyond his means.
It is learnt that the investigation was among a few high profile cases the commission was investigating following reports and information provided by the public.
According to sources, the political secretary was trailed by the MACC officers after allegations cropped up that he had secured properties by being the middleman in deals for approval of multi-million ringgits projects.
Posted by KS Cheah at 00:31

Email ThisBlogThis!Share to TwitterShare to FacebookShare to Pinterest
Labels: Bloggers, Excerpts, In The News, My Country, Politics, Stupidity, Trawled From The Net