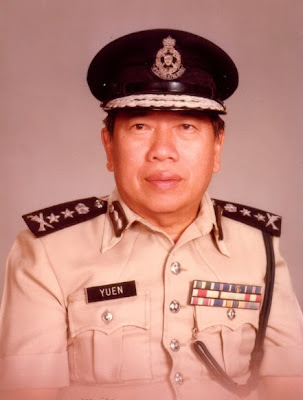 There was a discussion thread in my old school eGroup regarding the alleged Google and CIA linkage, here.

One commentator was Dato' Seri Yuen Yuet Leng and it makes interesting reading because he digressed. The famed patriot and communist fighter could not help venting about how Malaysians are screwing up Malaysia probably because he perceives the Malaysia of today is not the Malaysia he put his life on the line for.
Please read:
Every intelligence organisation will do the same thing, us inclusive, if we have the same access and the means, if nessary or expedient and normal diplomatic or legitimate channels failed or are inadequate. The vehicle is not only communications but any form of national activity or people. The point is not to be caught in the act. If you are bone fide diplomatic rep you will be asked to leave. If you have no diplomatic immunity you may even face the firing squad. I will be very surprised if Chinese intelligence is not also exploiting googles as well in their own way.

I only wish our internal "Katak" types realise early their retrogressive primitive tribal like talk so much about race and negative political religion that outside in the world of globalisation, nobody gives you any handicap in the name of indigenous ethnicity - you have to compete to requisite defined qualifications not because you think your colour or creed is better. Nobody cares how great you were in the past. It is whether you are good enough in the present.

More should read Zainon Ahmad's article dated 17th January in the Sun on how Tun King Ghaz put perspective right when he said in the early 1 970s to a contending few, "You haven't read the constitution have you? Had you read, you would have noticed there is no such thing as Malay or bumiputra rights. The constitution only accords the Malays and bumiputras special position, not rights ot privileges." Tun should know he was a very relevant party in structuring the original 1957 Constitution, 1963 Malaysia agreement and the 1970 NEP and the Rukun Negara.

Again on 28 November 1978 he wrote about national unity, the imperitive need pf the NEP following May 13 and the dangers of a NEP not proper managed (and what in fact Tun Razak was also apprehensive about):

"The national gaol is plainly spelt out in the Rukun Negara. National unity stands in the forefront as an imperitive without which there would be no national security. A nation comprising people of different races, religions, beliefs and communal customs cannot have their main pre-occupation other than the continuing quest for a guarantee that these diversities do not transform themselves into sharpened edges of conflict. Indeed each day of peace and stabilty is a bounty which should be relentlessly be devoted towards blunting these edges by all manner of devices through policies of social and economic development, so that desirable changes are brouhjt about within the context of schemetic growth and controlled distribution.

Thus the New Economic Policy should be viewed in this light. It is a bold attempt at societal engineering with the objective primarily to create the environment within a given time which would condition the steady evolution of a valuational system ommon to all races and creeds within respective general vocational framework. This together with some other objectives as poverty redressal which are mutually reinforcing would, it is envisaged, bring about national resilience and stability conducive to strengthening national unity.

In the short term time frame, firm measures would have to be taken to nip in the bud the emergence of issues which may bring about physical conflicts between communal groups as a result of extremisms."

A GOOD NEP ABUSED AND TURNED INTO EXTREMISMS of misguided RACIAL RIGHTS & POLARISED RELIGIOUS AND MISGUIDED ANTESCEDENCE while purist idealism on the other divide affords no compromise - on principle of law, I agree but on implementation of decision of law - it can be discussed without compromising law itself.

It is a pity that our English media did not convey fully what PM stated two days ago. Sin Chew carried something extra in mre details. The PM mentioned that one of best universities in the Middle East was managed by a non-Muslim professional from Singapo and of course he mentioned if we do not get out of the xenopobic box of prejudice and every possible fear we may be (WE ARE) being left behind economically by China, India and Vietnam while our racist and fundamentalist bigots hold tightly their own interpretation of respective faiths.

Email ThisBlogThis!Share to TwitterShare to FacebookShare to Pinterest
Labels: Alumni, Excerpts, Friends, In The News, My Country, Socio-Political, Trawled From The Net