In the animal world, domination is not necessarily about physical size but strength of spirit. We got Shadow, a year old male Labrador from my good friend and old schoolmate, Jason about 3 weeks ago. Shadow was infested with ticks and that posed a real problem. If not treated properly it could become a long term issue. And so the regime began; leaving him outdoors, spraying the walls and corners outside the house with anti-tick chemical, using anti-tick shampoo and finally, Frontline.

Prince Cheah, the alpha dog was only allowed to interact with Shadow after the Frontline treatment. The first picture shows Prince sneaking up behind Shadow. 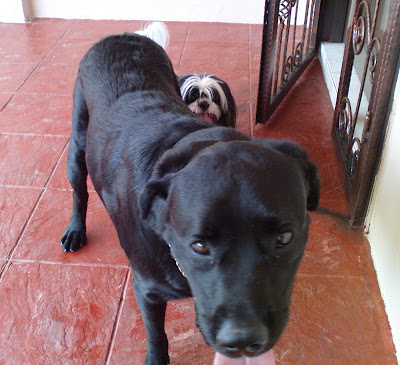 The second shows him giving Shadow a lengthy "lecture" after irritating and tiring out the latter for more than twenty minutes trying to climb on him (short video at the bottom). 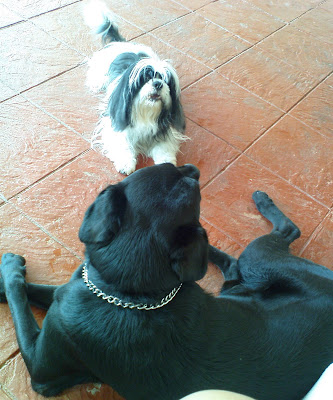 The third and forth show Prince stepping all over Shadow without regard for the difference in size! Prince has been the "top dog" since. 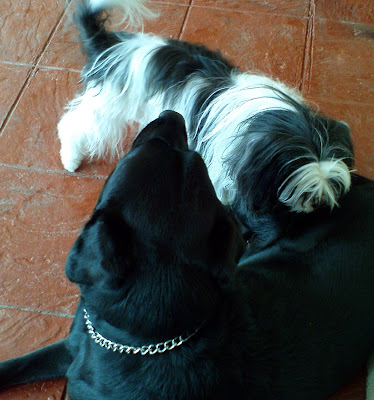 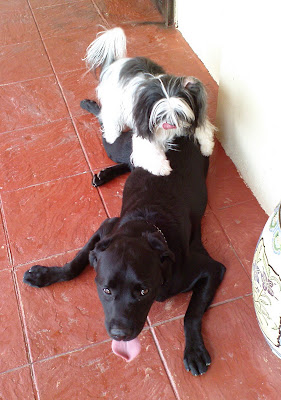 Looks like Shadow can put on more muscle mass.

Right you are Nic; have to bulk him up. I think he was fed leftovers and such by Jason's contractor to whom he had given earlier as a small pup. He was heftier when he came here and has been eating. But I suppose it is a different diet now that has made him leaner.

if you continue to feed Shadow with high protein food, he will start to build up the muscle mass and becoming broader.

BTW, I was chased by 3 blardy mutt while jogging with mine - reaching my 2.5km mark.

They were double the size of mocha, but mocha can easily out run them if not because of me slowing her down after a 400M sprint.

That was a quiet stretch of road with grass slopes on the side, the 3 mutts were hidden in the ferns higher up and sprung out when they saw us. (It was a little misty that night although it was only 9pm)

I was walking backward, facing them while they keeping a close distance, for the next 100m till we got out of their territory.

I think the last time i was chased by 3 dogs was when i was 9 in Teipin (roaming around town 11+pm), but there i can quickly squad down and pick up some rocks to throw at them.

what an experience... and exercise...

Ha! Nic...chased by dogs! It would be expedient to carry a stick next time you walk Mocha. Don't know about packs but I usually am not bothered if it is a single threatening dog...I attack it first. Your experience with the 3 mutts tells me it is the same with packs.

You just reminded me of my own Tepin experience at about 9 too. A neighbour's dog chased me. In the panic I jumped up a ledge but it was too high...hit my shin. The scar today is a reminder.