J.J. endearingly calls Prince "Scumbag" and sometimes the word fits Prince to the "T". There are so many things that Prince does, the list is endless:

The best part is, he never dared do it to Jeannie. For example, he would never have his backside at her face when he slept on the bed. Indeed he would even be in "reverse gear" when he moved away. He also did not dare wake her up in the morning and would only get up when she did...no matter how late. At about 10.30 at night when Jeannie was at her computer below the staircase Prince would climb the stairs to her eye-level and softly bark at her as if to remind her of bed time. When she was unwell we once saw him pull her blanket to cover her. Not many people will believe what we say.

Domination? Took this photo at 3.30 am yesterday. 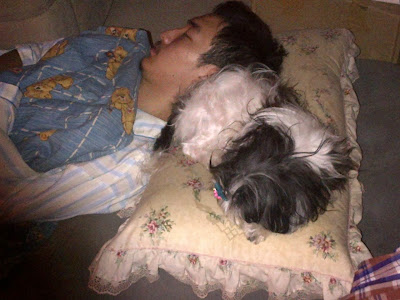