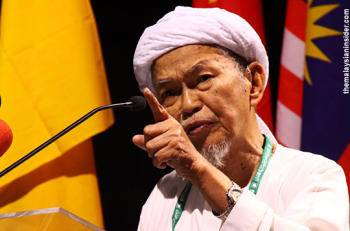 We must all be bored with this term EGM (Emergency General Meeting) by now. The MCA had theirs two weeks ago and before that the word had been bandied around as if it was the panacea for all MCA ills.

But when Najib brokered a so-called "peace pact" between OTK and CSL, that EGM is consigned to the annals of MCA history as what many now term the "MCA EGM Fiasco".

Since both sides lost in the EGM, OTK should have quit and CSL should have called it quits! However, they now decide to "kiss and make up" and it makes a mockery of the EGM. Two wrongs do not make one right. In any case, with the political irrelevance of MCA today, whatever happens in MCA is but a storm in the teacup. Who the fcuk cares who leads MCA anyway?

Now, the other EGM that is of total relevance to the country and all Malaysians is the EGM that PAS Spiritual Leader, Dato' Nik Aziz is insisting on convening. The results of this EGM will reverberate. This will decide whether we will be on course to becoming a Turkey or an Iran. It could also seal the fate of Barisan Nasional.

The Malaysian Insider has this insightful article:

Nik Aziz crafts an ultimatum for PAS
KUALA LUMPUR, Oct 25 — Even in a season where reform has become the most hackneyed word in the politician’s lexicon, Datuk Nik Aziz Nik Mat’s gambit in calling for an extraordinary general meeting for PAS has perhaps gone the furthest in defining the Malaysian political spectrum.
By proposing an EGM the PAS spiritual leader is effectively calling for fresh polls to weed out “problematic leaders”, his euphemism for the conservative spine of the party whom he feels are not totally committed to the Pakatan Rakyat (PR) coalition.
Ultimately, he is pushing for PAS to be clear once-and-for-all about its agenda and where it stands.
In doing so, the Kelantan Mentri Besar is pushing forward a proposal which is more substantive than the festival of rhetoric at the recent Umno general assembly.
Umno president Datuk Seri Najib Razak spoke of inclusiveness. Umno Youth chief Khairy Jamaluddin urged the Malays to end their siege mentality.
But neither leader’s speeches are likely to change what their party’s rank and file think about the concept of Ketuanan Melayu, or Malay Supremacy, or even money politics, the party’s euphemism for vote-buying.
It will not be plain sailing though for Nik Aziz in his campaign for an EGM.
Party leaders have been cautious in their response to the proposal.
They have pointed out that it would be up to the Majlis Syura Ulama or the Religious Scholars Consultative Council to decide whether it is necessary to hold a special muktamar.
The party’s powerful Syura council is led by Nik Aziz(picture) and most members of the central committee are also part of the council.
It is clear from ground reports that there is tension between the young progressive elements and the conservative school.
Despite some voices of disapproval, Nik Aziz said yesterday he remained firm about the party having an EGM which insiders see as a way of deposing PAS president Datuk Seri Abdul Hadi Awang for leaders warmer towards a full-fledged opposition pact.
Abdul Hadi and his conservative allies triumphed in the last party polls over the so-called “Erdogan” faction, which is more partial to the PR coalition.
Nik Aziz’s call for an EGM is seen as a last ditch all-out attempt to bring PAS closer to the pact rather than a more detached relationship with its allies PKR and DAP.
His protege Datuk Husam Musa lost his bid to take the deputy presidency from incumbent Nasharuddin Mat Isa, who with senior leader Datuk Mustafa Ali, is seen as representing the conservative spine in PAS.
Nik Aziz however favours Husam and his faction known as “Erdogan”, named after the Turkish PM who took his Islamist party to success in Turkey and is seen as close to Datuk Seri Anwar Ibrahim.
While PAS has championed its “PAS for All” slogan, conservative elements still talk about banning beer sales and other punitive laws. Nik Aziz has blasted these leaders and has asked why Hadi has not stamped out such talk and quashed efforts to get closer to Umno.
Nik Aziz is virulently opposed to any form of cooperation with Umno as the Islamist party was part of Barisan Nasional formed in 1974 but quit later due to a clash of wills that led to PAS losing Kelantan in 1978.
His EGM gambit will have wide ranging implications on PR and the growth of the two-coalition system.
Posted by KS Cheah at 09:43

Email ThisBlogThis!Share to TwitterShare to FacebookShare to Pinterest
Labels: In The News, My Country, Politics, Socio-Political, Trawled From The Net

nik aziz is simple man? yes and he is the modest leader in the world. but what he has done to the muslim people in malaysia is beyond of his character.

He can punish people by giving fatwa/decision, whom can enter paradise and who are not. He said PAS member can go to paradise and UMNO can go to hell, but what will happen to fence sitter like us, and other non-muslim, are we go to between neither paradise nor hell. and what happen to some PAS leaders like Nasharudin as what he said “tali barut UMNO’ – UMNO agent. where he goes.. to hell or paradise, as well hj hadi and other PAS supporters who he branded as pro-umno group.

Through his fatwa (religious verdict). he ruins Malay and Muslim society into choas and hatred.

This is the real thing people should look, dont judge by the cover.

You are right Rahimi. As a non-Muslim I can never fathom how a mere mortal (whether Nik Aziz or otherwise) can for example, condemn another to Hell by merely issuing a fatwa. I think in Malaysia, Muslims need to resolve what they collectively think Islam should be. Growing up in the 60s and 70s I know Malay Islam was not like what it is today. Things changed perceptibly after Mahathir's Penerapan Nilai-Nilai Islam Policy which Anwar also helped propagate. Perhaps they should read what RPK has been saying all along about his own understanding of Islam and I think it is rather beautiful.