The Meek Inherit The Earth? No Lah...The Youth Shall

I was wondering what our conscientious or at the very least, conscious youth are up to. After all the statistics are staggering that come 2013 (at the very latest), their voting power will decide who will decide their future.

1) In the tsunami of GE12, 2008, out of a total registered voter base of about 10.9 million, there were a total of 8,109,134 votes for 214 parliament seats at stake on Election Day. Eligible voters according to the Election Commission stood at 10,516,256. Assuming partisan voters voted as they should, the massive shift of popular support indicated overall dissatisfaction and cry for change. Malaysians are generally aware of the whys, given the number of after the fact, analyses after analyses.
2) The opposition would have had an outright win if it won another 30 seats (to form a majority in parliament) and all they needed was just another 56,000 votes.
3) There will be about 29 million Malaysians come 2010 as indicated by the following stats from the EPU and Statistics Department: 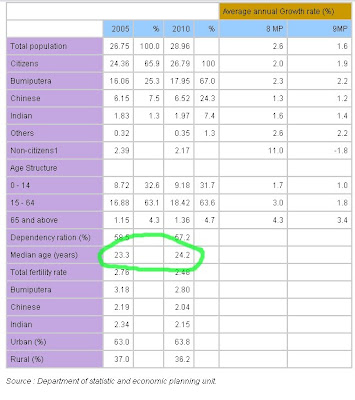 What is important to note is the median age of the populace will be 24.2 years, with 63.60% within the 15-64 age band.
4) 4 million eligible voters (mostly aged under 30) did not register in time for the 2008 elections.
5) By the next general elections another estimated 2 million young Malaysians will be eligible to vote, making the total number of eligible voters 16.9 million. Given the population census, it would be safe to assume most are under 40 years of age, which also happens to be the age limit of political party youth wings.
6) Analysis of the March 2008 elections showed that the majority of newly-registered voters and those below 30 supported the Opposition.
It is obvious that Malaysian youth no longer wallow in political apathy. They tend to be aware of what is happening around them. More crucially, they have varied reasons to vote for the opposition. They are connected not only insofar as issues are concerned but also in terms of cyber-networking; the key reason being that young Internet-savvy voters obtain their news chiefly from the pro-opposition alternative media, which they perceive as more credible than the mainstream media.
The writing on the wall for BN is obvious; connect with the young voters or become the Opposition coalition after the next general elections. Fielding younger 30s and 40s candidates alone will not do, just as trying to get old BN dogs to learn new tricks is near impossible.

The next GE appears only for PR to lose mainly through the youth. The reality is that the more politically conscious amongst the youth are likely to be conscientious enough to register for voting and being young, they can afford the time and the space to experiment with change! With this said, at 10.00 am today I Googled "PAS UMNO Youth" and this is what I got:

BERNAMA - Pas Youth Challenged To Team Up With Umno Youth Against Dap
7 Aug 2009 ... MARANG, Aug 7 (Bernama)-- The Umno Youth movement Friday invited itsPAS counterpart to be together with the movement in a ceramah to be ...bernama.com/bernama/v5/newspolitic.php?id=431158 - Cached - Similar -

The Nut Graph Umno Youth lauds PAS Youth's “courage” (Updated)
At the moment, neither PAS Youth nor Umno Youth have given a suggested date or ... [PAS Youth and Umno Youth] have not even gone out on our first date yet. ...thenutgraph.com/umno-youth-lauds-pas-youths-courage - Cached - Similar -

Khairy to PAS youth: Come join us to defend Islam
7 Aug 2009 ... MARANG, Aug 7 — The Umno Youth movement today invited its PAS ... Well, if PAS Youth does join up with UMNO Youth, it will confirm their ...www.themalaysianinsider.com/.../34552-khairy-to-pas-youth-come-join-us-to-defend-islam -Similar -

It looks like more of the same old, same old; the jingoism that is synonymous with the kind of seige mentality which is more reflective of containing the barbarians within the gates than keeping barbarians at the gates. Come the next GE, PAS Youth members are likely to still vote PAS but the same may not hold true for UMNO Youth. Compare all this to PoPTeeVee and a new movement that was launched recently: Youth For A Better Malaysia.

The latter is organizing a forum on the 16th of this month and in their own words: 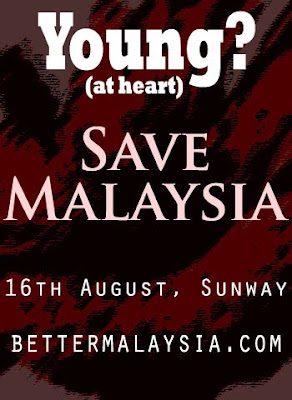 Accomplished Malaysian youth from various sectors will provide insight, guidance and networking opportunities to Malaysians only a few years younger than them, in the hope of building relationships and bonds that will result in a stronger, more united group of young people empowered to continuously improve Malaysia.

The forum also hopes to bridge the widening gap between Malaysians who study in different countries overseas and local students by providing a shared opportunity to exchange views and better understand diverse perspectives.

2 panels will be held simultaneously -

2 panels will be held simultaneously -

Check out the speaker profiles and see what you think. I personally think there is hope yet for tomorrow's Malaysia because of today's youth!
Posted by KS Cheah at 10:04

Email ThisBlogThis!Share to TwitterShare to FacebookShare to Pinterest
Labels: Bloggers, My Country, Notices, Politics, Socio-Political, Trawled From The Net