Defense Of The Realm? Nation Before Self!!!

I noticed a post in BigDogDotCom's blog which is to me as rabid as they come. It only proves Malaysians are less educated in the nation's history today because the schools are doing less in teaching the truth and the cinemas and mainstream media are allowed to shape perceptions that are not the whole truth about our nation's formative years.

I am no DAP member but read this BigDog number, "What Is DAP's Contribution To The Defense Of The Realm?" and you will realize it is not really about the DAP. The shallowness indicated by the few examples the dog dug up seems to reflect naivete and movieland style knowledge of history.

I sought an opinion, and some true stories and testimonies that ALL races sacrificed are indicated in an exchange of correspondences I had with Dato Seri Yuen Yuet Leng about what's real.

"What Is DAP's Contribution To The Defense Of The Realm?"

Yesterday, was the national level celebrations to honour our warriors. It is to commemorate those who bear arms to defend the sovereignity of this tanahair and ibu pertiwi.

Since 1933, Malaya has had military units. The oldest is the Royal Malay Regiment even though the Police has then around since 1807. Men have lost lives, been wounded and their families suffered for the sake of this nation ever since. To date, they have accumulated so much victories and success stories. Equally, they have made sacrifices. Like the Royal Malaysian Police in Bukit Kepong , Johor (during Emergency), Royal Malay Regiment in Kalabakan, Sabah (during Confrotation) and Royal Malaysian Navy lost a ship KD Seri Perak in a South China Sea storm, 1984. These dead and surviving warriors are honoured.

DAP claim that they are a multiracial Malaysian political party, which promotes equality amongst Malaysians. Their tagline is “Malaysian, Malaysia”. ‘Equality’ should transcend beyond rights and privileges but should also include responsibility. DAP should promote that all Malaysians bear the responsibility to take care this nation, which include risking their lives to defend the sovereignty of tanahair and ibu pertiwi.

Yet, so far we fail to see that. What we only see is that DAP will politicize and capitalise to the maximum every opportunity to bash enforcement agencies, especially the Police. DAP Leaders in private even supported the idea and attempt to bring back Former CPM Secretary General Chin “Butcher of Malaya” Peng.

Hence, for this year’s warriors day celebrations, we here at BigDogDotCom demand that DAP play their role to constructively promote human capital initiatives for the defense of the realm. Enough is enough on the Police and enforcement agency bashing.We hereby challenge DAP bring out the Non Malays, particularly the Chinese to the very least make up 35% of the application into all positions within essential services, especially the military and Police.

Before anyone argues that the Non Malays, especially the Chinese would be marginalised and even alienated if they join the any of the essential service forces, think again. Malaysia is not like Singapore. In Malaysia we will allow Non Malays to have a career in all the military services and Police Force.

Failure, especially with excuses will only demonstrate DAP being a true blue chauvinist party.

In the time being, lets sing the patriotic song for the warriors:

This post was by blogger BigDog and shows typical Malay chauvinism when it comes to the defense of the country. It is because our schools teach only about Malay armed forces sacrificing their lives, that our Malay brethren think the other races did nothing but supported communism. You know it is rubbish. How would you answer such idiocy? 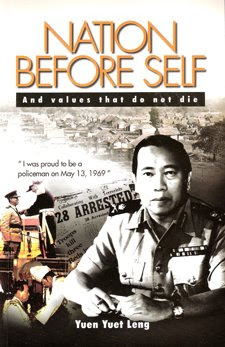 School history books and nationally and politically enlightened teachers and of course, balanced politicians have to correct the bigoted eyes and minds of the past. Maybe if more Malaysians, both Malay, Chinese and Indians read my book, Nation Before Self then the BigDog types will think better and realise that race is even a bigger threat to a wholesome nation. I reproduce something I saw on the internet some time ago:

I wish to congratulate Dato Seri for sharing his thoughts and experiences. Most importantly he shared himself in this book. He is still the officer and the fighter he has always been.

I agree with Dato Sri that the present government and people has conveniently forgotten the heroes of yesterday. These are the heroes that put the country above themselves and their families.

I wish every department in all government agencies, all schools, all teachers colleges, and all police stations have at least five copies of this book to be read and discussed. I also wish the PM and all ministers have and read this book diligently and talk about its contents to their staff during their monthly gatherings. If they can talk about a particular book (e.g. The Blue Ocean), I’m sure they can also talk in depth about this and other books produced by a true Malaysian.

I also wish the government will take up on some of the suggestions made by Dato Sri especially on appreciating the sacrifices made by those who had died for the country. The Police Force and the government owe it to those who sacrificed their lives to ensure the families left behind are taken cared of.

To Dato Sri and his family, I wish them all good health and may they always find the comfort that the sacrifices they made are not in vain. God Bless."

Find comfort and hope in the reality in nation that there are more and more better enlightened Malaysians in every community who together who remove the racial chains around our feet but it is those in the Malay community who can decisively make the crucial difference but we must ensure that the needful Malays do continue to be aided as the same of other communities must also now be helped in better substance and justice.

Thank you for your precise reply. I felt it should be shared with more Malaysians so I blogged it. Please check out:

Email ThisBlogThis!Share to TwitterShare to FacebookShare to Pinterest
Labels: Alumni, Bloggers, Friends, History, My Country, Socio-Political, Trawled From The Net