A Wish Common To All Bangsa Malaysia

I posted this message in my alma mater eGroup today. I hope...

Most of us have been watching the unfolding of a New Horizon in the Malaysian political landscape since GE12. Some of us (me included) remain skeptical and adopt a wait and see attitude although it is clear that anything apart from the status quo would be a better option. The process of change has already started and for better or worse, none of us can avoid being affected. Nevertheless, I think we all share a common wish; that this change happens without bloodshed and civil disorder.

I have searched for the right words to post in this colorblind Tiger community of ours to reflect this Bangsa Malaysia wish for the country for some time now. Today, I spotted the following blog post by Nathaniel Tan. This is the young man who was arrested and released under the ISA last year writes well, and I believe he has put things rather well here. Hidup Bangsa Malaysia!!!

The real significance of Ahmad Ismail
Posted on September 9th, 2008 by Nathaniel Tan 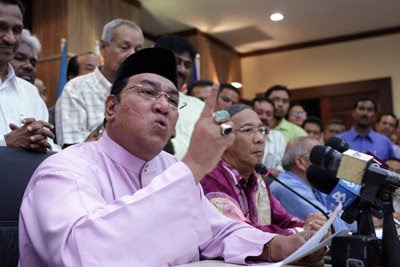 Does Ahmad Ismail represent a huge swath of Malaysian society, or is he a lone ranger?

Examining this question may yield important answers about the current state of Umno in Malaysia.

After Monday’s incident which included infantile supporters ripping up pictures of Koh Tsu Koon, we can expect some further shows of support for Ahmad by a few individuals and groups.

It is worth recalling the NEP protest in Penang and Selangor soon after March 8th, as well as the UiTM protests more recently. These gatherings, numbering usually in the low four figures or so, should have us questioning just how deep and wide the fears of Malay Malaysians currently run.

Concerns about uprisings were indeed widespread in early March, where many feared the period when Umno-led ultranationalists would have had the most reason and impetus to display extreme displeasure with the election results.

That cloud passed without a storm, a fact which left a distinct impression amongst Malaysians that we had come a long, long way in our fifty years of existence as a nation.

The passing of this storm should not be taken to mean however, that widely felt, legitimate concerns amidst the Malay middle ground do not exist.

In an era where globalisations swallows cultures whole, and amidst a global backdrop where Islam appears constantly under siege, it is undeniably understandable to fear the loss of one’s identity.

Thus far, that risk is in Malaysia offset by truly painful, back breaking governance by the incumbent ruling coalition as well as the existence of a currently acceptable alternative. That said, the concerns that communal dignity and identity are at risk remain and people will continue to watch closely.

Luckily for Malaysia, the current willingness to take a chance on a new government goes hand in hand with a lack of appetite for destructive behaviour on a mass scale. Malaysians have proudly shown that they love their families and their neighbours too much to visit violence on one another in solidarity with a party that has done more than anyone else to frustrate its own stated aims.

We now face the possibility of another major political shift, and are once again faced with the same questions of whether a major uprising of discontent is in the books.

My feeling is that if it didn’t happen in March, it will not happen in the event of a change of federal government. A number of observations inform this view.


Umno no longer trusted by Malays

Firstly, we must not underestimate the power of a simple truth: that Malays have been betrayed not by any ‘kaum pendatang,’ but by Umno itself.

The last few decades have seen damage done by Umno to itself and to the Malay community that can only be described as irreparable - a term not used lightly.

With the centrality of image to politics, the typical mansion-dwelling, Mercedes-riding Umno leader who built his or her fortune on the back of poor Malays is an enduring liability, as is its role in creating an increasingly dangerous and widening gap between the Malay poor and the Malay rich. Pakatan Rakyat’s constant reinforcement of this image has certainly hurt as well.

Umno’s stewardship has by its own admittance failed to realise the goals of policies such as the NEP aimed at raising the standard of living in the Malay community. Raised keris in one hand, the other hand has stole everything of worth from Malays and Malaysians. Fortunately, Malaysians can now see in the cold light of day what been done time and time again by those hidden hands.

As a party, Umno has clearly degenerated from a service oriented institution to a patronage based one. While this may have been vaguely, if immorally, sustainable with a totalitarian idealogue at the helm during good times, it is certainly not surviving inept leadership and even more severe levels of graft. Ahmad’s defiance is also clearly symptomatic of the dangerous power vacuum left behind in the leadership crisis currently affecting Umno and BN.

In short, with ever dwindling public support - especially in urban areas - Umno is indeed a sinking ship. Take away the myth of invincibility, as was done in March, and very little of substance remains.

This is not to say that the Umno hardliners are without any support whatsoever. Yes, there is a section of society - from all ethnic groups - who are simple, hateful racists. I don’t think they number greatly though; the group we should watch is far more sophisticated and dangerous.

We must remember that many, many people got rich via Umno connections - connections that soon stand to lose essentially all their worth (except perhaps if you live, say, in Johor).

In other words, there is a massive amount at stake.

The priority of those who stand to lose so much is, obviously, to retain power at all costs. For Umno, means of doing or so are limited by at least two impossibilities: moving towards true integrity, and moving out of a race-centric framework. The former would defeat the entire purpose and the latter, the raison d’etre of race based parties.

In Umno, this means that as far as strategies go, they are back to square one: defending Malay supremacy against the “evil machinations” of non-Malays.

I think it is wisest to view this desperation coldly. Rather than rush to defend the dignity and rights of non-Malays, which is all well and good, we should be thinking about how to manage any potential impact the rhetoric of Umno leaders like Ahmad Ismail may have.

Fortunately, it is unlikely to achieve much mileage or gain traction on its own merits, for the simple reason articulated above: people no longer trust Umno leaders - not even to defend Malay dignity. 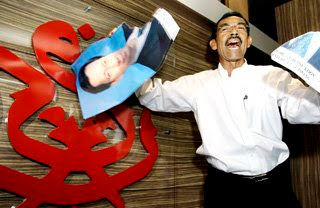 That said, we should both expect and not be surprised by some level of support, recalling again that many individuals and their dependents (who provide bodies and numbers when called upon) rely on Umno not for the dignity or prestige of their ethnic group, but for the size of their wallets.

We should also not take this threat for granted, but manage it wisely.

It is thus the duty of myself and many reading to reinforce the notion as publicly and as often as possible that the central tenets of Malay economic well being, culture, religion and way of life will always be held sacrosanct in this land and never, ever sacrificed to posterity or allowed to assimilate excessively and fade away.

The rest, I leave to my Malay brothers and sisters.

The clock ticks for Malaysia; race-based politics has been the biggest structural impendiment to true Malaysian harmony by far, and the time has come to leave it far behind in the dust of history.
Posted by KS Cheah at 13:44

Email ThisBlogThis!Share to TwitterShare to FacebookShare to Pinterest
Labels: Politics, Socio-Political, Trawled From The Net