Petronas could go bust by 2018
By WONG SAI WAN

KUALA LUMPUR: Petronas will go bust within 10 years if all its profits are handed to the Government to continue subsidising fuel, said its president and chief executive officer Tan Sri Hassan Marican.

He warned that many national petroleum companies in the world have ceased to exist or were in financial trouble today because all their profits were taken away from them.

Speaking at a special briefing on Petronas’ contribution to the country, Hassan said that in the oil business it was important to reinvest profits in search of new technologies, reserves and continued revenue. Petronas has so far reinvested RM178.9bil of its profits.

“Petronas has played a major role by giving back a substantial amount of its profits to the Government,” he added.

At the close of its financial year in March last year, the national petroleum company had given the Government RM52.3bil in taxes, royalties and dividends which worked out to be 32% of the Federal Government’s revenue.

“Since the formation of Petronas in 1974 to last year, the company gave the Government RM335.7bil out of a total profit of RM570bil,” Hassan said.

Commenting on the fuel price increase, the Petronas boss said the corporation did not make a sen from the increase.

“All the oil companies get full market price for the petrol and diesel that they sell and the Government pay them the difference from the fixed price. This is where the subsidy comes into play,” he added.

Hassan revealed that oil companies operating in the country spent RM40bil a year in drilling and exploration works and a lot of this money wasinjected into the local economy.

Hassan also pointed out that it was now more expensive for Petronas to explore and extract oil.

“A lot of focus is placed on the high oil prices. There is very little talk about costs. The costs to explore and to drill for oil have increased by about 200% over the past three years.”

“That is the world’s biggest, most efficient and most well-run oil company. Margins have eroded,” he said.

Hassan said Petronas was now “ scraping the bottom of the barrel” as far as finding and extracting oil was concerned.

Asked about criticisms that Petronas' accounts and profits were not transparent, Hassan said the corporation published a very detailed annual report which was deposited in the Parliament library.

“For all intents and purposes, Petronas is a public-listed company because we are rated by agencies like Standard and Poors, and Moody. We do not hide anything,” he added.


What would he say about the following comparison chart? Perhaps this is for our government to answer. 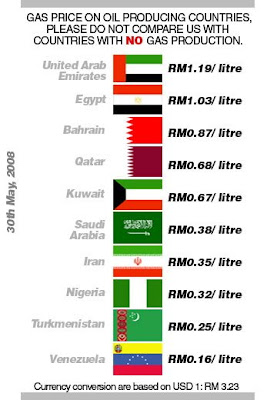 Email ThisBlogThis!Share to TwitterShare to FacebookShare to Pinterest
Labels: In The News, Socio-Political, Trawled From The Net