An Annual Ritual That Will Never Be The Same Again 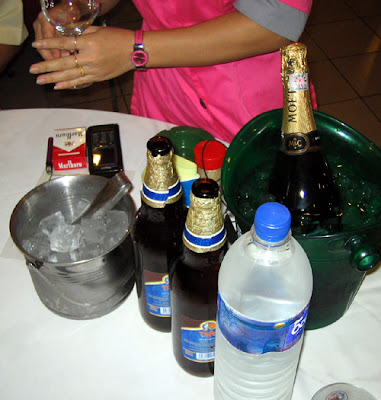 In 2004, after Jeannie had her colon operation she decided to celebrate her 45th birthday with a roast pig party; she was born in the Year of the Pig. That was also the same time we met cousin Nick's colleague from London, Adam Morgan. For the decade Adam spent in Hong Kong, he had never attended a party where the main dish was a whole roast pig.

Later in the year, Adam visited KL again as the legal advisor to the owners of the Malaysian A1 Grand Prix team in its inaugural year. He introduced us to the key members of the team including owner, Jack Cunningham and marketing director, Owen Leed. Jeannie and I hosted lunch at the Hakka Restaurant. Our new friends liked the restaurant so much (especially the deep fried trotter, below) that we all agreed to make it an annual ritual whenever the A1GP leg was in Malaysia. 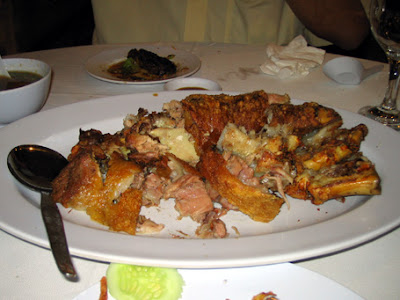 Last year, the Malaysian leg coincided with Jeannie's 47th birthday and Jack, Owen and Adam presented her with a bottle of Moet & Chandon. The bottle of champagne still remained after Jeannie's passing.

It was different this year without Jeannie when I met Adam and Owen for lunch at Hakka last Saturday. Jack was still in UK and would arrive in KL before race weekend, 24/25th November. I had brought the bottle along intending to share it in honour of Jeannie but after a bottle of Chivas later, we decided to open it on Tuesday when we planned to meet again. We were to meet for dinner just before Adam's flight back to UK, at El Cerdo Restaurant, Jalan Changkat Bukit Bintang where the theme is PORK! 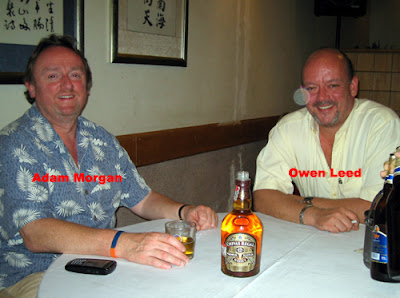 Invariably, conversation was centred on Jeannie and how things would be with her around.

Looking at the photograph on the left, perhaps Jeannie was with us more than just in spirit at the Hakka Restaurant that day; notice the mysterious "energy orb" near Owen's face.

Wherever you are Darling, you are never far from our hearts.

Email ThisBlogThis!Share to TwitterShare to FacebookShare to Pinterest
Labels: Friends