A Tiger Weekend In Taiping

I was in Taiping over the weekend from Friday, 29th June to Sunday, 1st July. It was supposed to be a trip to watch the KEVII Old Boys versus Present Boys rugby game on Friday, attend the KEVII Annual School Sports on Saturday afternoon and the Annual Alumni Reunion Dinner in the evening, before attending the OE Association AGM on Sunday morning.

It was supposed to be a weekend with fellow Tigers. A busy weekend was planned; coupled with the fact that on Sunday I had an appointment at 4.30 pm in KL with a house-owner to view his property and Tiger Captain Azmi's daughter's wedding at Subang Sheraton was at 7.30 pm, it was expected to be hectic. Hmmmm..............Plans!!!

Friday, 29th June:
Was supposed to be in Ipoh by 4.30 to meet Tiger Mariappan after coming from KL with Tiger Patmanathan so that we could be in Taiping by 5.30 pm, in time for the rugby game. By the time Pat found the workshop in Klang that his car was being repaired in, it was already 3.30 pm. That put paid to the game as we only managed arrive in Taiping at around 7.00 pm.
After a quick dinner it was time to ceremoniously go off to the Taiping New Club bar. The usual bunch of Tigers would be there. They were there! The "tani" session which ended at 3.00 am was followed by the compulsory supper at "Siang-malam" (or "Burung Hantu", as it is sometimes referred) near the market. The latest OE "Datuk", Tiger Datuk Shalimin was at the club and though he was supposed to be the guest of honor at the Sports the next day, he was with us till the end. That speaks volumes for his Tiger Spirit. 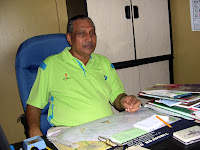 (Tiger Mohaideen in his office)
The previous night, I had picked up a "straggler"; as is very common and has virtually become a tradition in trips like these. Tiger Randhir (our ex-Olympian hockey player & coach) was in need of a bed for the night and I obliged since I had another single bed to spare in my room at the Panorama Hotel. I must admit this is the first time I slept with a Baii!! 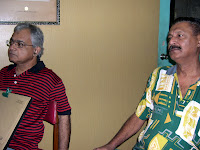 (CK Loh, Teck Boo, Michael & KS)
Tigers C.K. Loh, his brother, Tiger Michael and Tiger Teck Boo arrived at around lunch time and after lunch at the Casual Market, we went to the school at about 2.00 pm. The weather was bloody hot and there was no sign of the infamous Taiping afternoon showers. We did not stay for long and was soon off in search for refreshing famous Taiping cendol.

(Tiger Datuk Shalimin)
However, we did manage to catch Tiger Shalimin's speech and the march pass. It was an obviously pissed-off Shalimin as the Headmaster, Haji Yahya Liman was absent because he had to accompany his daughter to UTM or something! This was bloody ludicrous and typical of the headmaster. Shalimin showed his magnanimity by donating RM7,000 to the alma mater.

(Saluting the VIP)
We also managed to go round the school grounds taking photos of buildings that had changed so much in our memories and also in reality; much renovations had been done in the past 3 decades. The school hall somehow looked and felt smaller but then again, it was probably because we were now much bigger than we were then. The plaques on the walls looked the same apart from having 30 or so more names.

(Head Prefects through the years)
The "red and black" school colors seem more pronounced throughout the school grounds yet I had a feeling that most of the students I came across did not know the actual meaning of being part of the great Tiger tradition. All the signs were in red and black, as were some motorcycles, most T-shirts, posters, etc.

The basketball court had been refurbished but sadly the great hockey pitch we used to have has been reduced to a patchy turf with two broken down hockey goalposts at both ends. This is a far cry from my days when the pitch was the best in the state! It is such a waste! 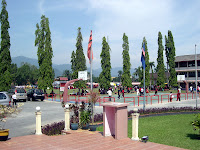 Though the appearance of the school had changed somewhat, there was no mistaking the feelings of belonging, as were went around the school. We left the school premises after taking more pictures of the Sheffield Block and as we were about to walk though the main gates, the sign below probably sums up what KEVII School has become today; "neither here, nor there"! 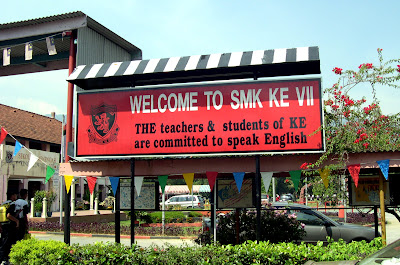 A call and a commitment to improve the command of English through speech. Unfortunately, the sign must have been approved by an English teacher and I think the emphasis should not have been on the "THE".

With that, we decided to go further back in time by visiting the Primary School building on Station Road. 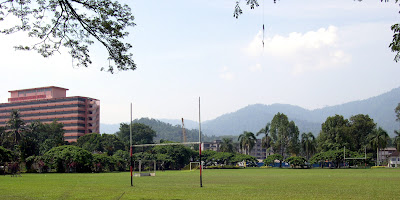 The primary school buildings and grounds (including the Angsana trees) were immaculately maintained and credit must be given to the headmaster, whoever he is. Though C.K. and Teck Boo were never in KEVII Primary, I am sure they too felt they belonged there. The "tiger spirit" was seemingly pervading the air surrounding the premises. 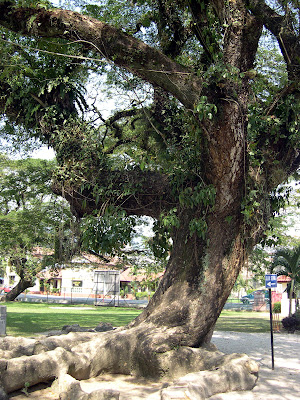 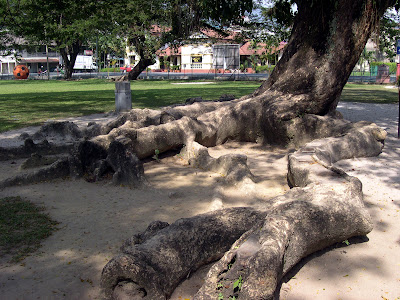 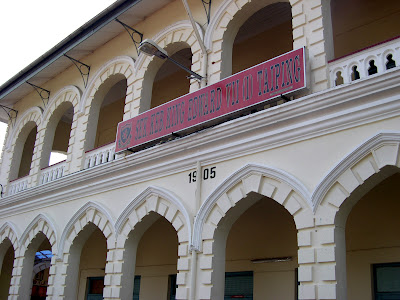 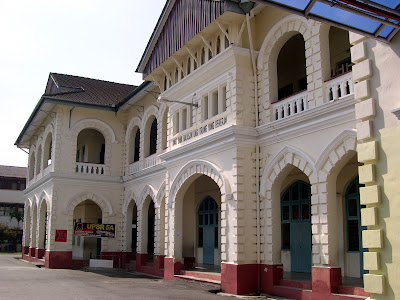 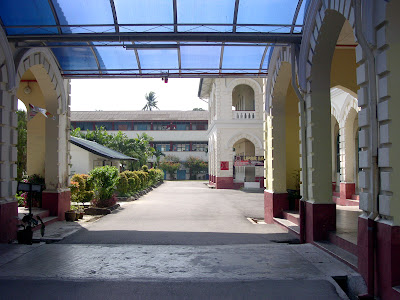 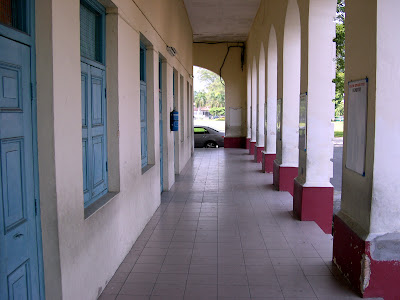 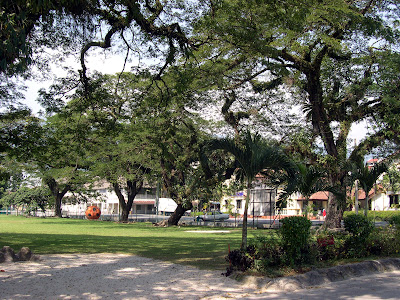 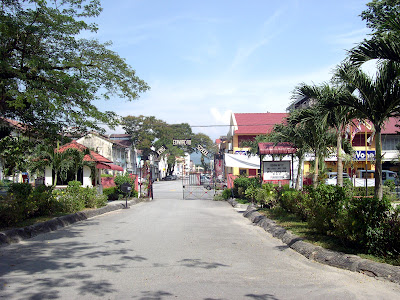 The OE Dinner that evening was the usual fare but I was surprised to see only about 22 tables of which 2 were empty! The guest of honor was former police officer, Datuk Hairuddin and Tun Ling Liong Sik was also present. Somehow, the atmosphere was drab and I get the impression that most people, especially those at the main table were just waiting for the occasion to be over. But then again, I could be wrong.

For a last dinner before the 125th Anniversary Dinner in August next year, very little was said about the programs for next year. The only things positive about the evening were the speeches by Tiger Datuk Hairuddin and Tiger Datuk Salimin that acknowledged the sorry state of the school; the two have made a commitment to do something. Tiger Salimin mentioned that there was no school in Malaysia which has produced 4 Education Ministry Director Generals and yet, the way the school is today does not reflect that. He wonders why. 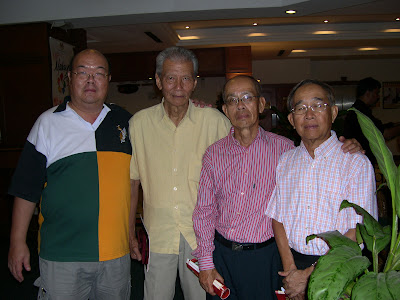 (Tiger Lian Tai Teong, 2nd Left; Tiger Raja Lope, Far Right) On a personal note, I got to meet an old family friend, Tiger Lian Tai Teong after more than 20 years. He has now settled in Sydney. I remember him as one who was so sure he would not live past 40; I think he is wrong by quite far.

The OE AGM was held as scheduled but I did not stay behind to attend. It appears those who are supposed to be voted in would easily get voted in. Sunday was a day fraught with miscommunications and by the time I got back to KL, I was too late and too tired to attend Tiger Capt. Azmi's function at the Subang Sheraton. Looks like I missed the wedding of the decade!! I think next time, I shall drive to Taiping myself.

Email ThisBlogThis!Share to TwitterShare to FacebookShare to Pinterest
Labels: Recreation

Why forgot to mention the phone call made to your Tigress at 3.45am...taking away her much needed beauty sleep......male species, especially those from King Edward Taiping. Once in their home ground and see their school...ah...time also upside down....Glad you had a good break. Long live King Edward VII School.

Darling, you have long qualified to be a Tiger!