Recently, I chanced upon an episode of the TV series "Judging Amy" while surfing the channels on Astro. There was a sub-story about a boy who had been hit by a car and doctors were trying to save his life as he had massive internal bleeding. His vital signs were diminishing and was given only 30% chance of pulling through. What struck me about the story was not the boy but seeing what his father was going through at the hospital.

A sense of regret came over me as I remembered my own experience as a motor accident victim, and that I had never really wondered what my own father actually went through. As far as that accident was concerned, I had always been consumed by "what" happened to "ME"; "I" suffered; "I" almost died; I thought it was ONLY about ME! 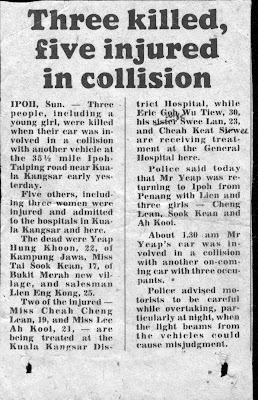 Slightly more than 26 years ago on the 4th of April, 1981, while on the way back to Taiping for Ching Beng I was involved in a horrific car accident that claimed 3 lives. The accident was near Bukit Gantang where last week, that bus accident which claimed 20 lives occurred.

There were 3 of us in a Ford Escort Ghia driven by my brother-in-law, Eric with my sister, Grace seated in front. I was at the back and happened to be lying down when the collision occurred. The fact that I was lying down on the back seat probably saved my life; otherwise my neck would have been broken. I was asleep when the collision occurred and woke up on damp grass and to the voices of people checking out the wreckage. It was obvious there were fatalities from what they were saying but apart from knowing I was alive there was no inkling of what happened to Grace and Eric.

The previous day had me and my friend Kok Seng Teck riding around KL in the rain on his motorbike; that accounted for me being tired. Seng Teck, from Ipoh was supposed to accompany us back up to his home town. We had dropped him off after supper and continued our journey to Taiping after midnight. There was no North-South Highway back then.

As we passed Padang Rengas on a straight road, a car overtaking at the blind corner ahead rammed head-on into us. I later found out there were 5 people in the Mazda 808 and 3 of them were killed.

Grace was 6 months pregnant at the time, and the seat belt which saved her life unfortunately fractured her clavicle and probably also caused her to miscarry. Eric sustained leg injuries and he limps slightly till this day. My injuries that caused me to be hospitalized for more than 2 months, were the worst. Apart from a broken right clavicle, I had internal bleeding due to a badly larcerated right kidney and went into shock. My blood pressure was plummeting and pulse hardly perceptible. I remember flitting in and out of consciousness and that my mother was already at the Kuala Kangsar hospital (the first hospital I was taken to); I remember pissing blood into a urinal. I remember the dull internal pain and breathing becoming increasingly difficult.

At Kuala Kangsar hospital I remember seeing Grace on a hospital trolley next to me and was conscious. She was crying and looking for Eric and I remember I lied to her that he was okay eventhough I had no idea how Eric was at the time.

I would have died if not for a series of fortuitous incidences that followed the accident and my father's intervention. In fact, this retrospection is not about me; it is about my parents. The accident had occurred at about 1.30 am and the first fortuitous thing was that Eric was conscious throughout. The second thing was that a good samaritan had stopped to offer help. He managed to get information from Eric as to who to contact and that saved my life!

Till today, we do not know who the guy is but he phoned my parents and they rushed to Kuala Kangsar after picking up our stuff from the guy at Simpang. I can now imagine the consternation that my parents were experiencing as they drove pass the wreckage towards Kuala Kangsar.

My father was a "take charge" kind of a guy and the fourth fortuitous thing was that he was there early. When he saw my condition, his first reaction was to ask for the doctor. When he found that there was none around but a hospital assistant, he made such a fuss that they had to summon a doctor from somewhere. My father insisted an ambulance be made available immediately to send us to Ipoh General Hospital and the doctor never had much choice in the matter as my father threatened him with all sorts of pernicious things that could go wrong with his career. That saved my life and my right kidney!

From Kuala Kangsar, my father phoned his friend Mr Levins who was also the Chief Surgeon of Perak and Levins and his team were waiting for us when we arrived at Ipoh GH. Levins immediately got me into emergency surgery and I was told later that I would have died if I had stay any longer at Kuala Kangsar. I cannot imagine the emotional pain my father was going through at the time but the example he set by being so collected under pressure is one of the most important lessons he taught me. His own emotions must have been in turmoil yet he managed to "pull all stops" for us and made the right decisions.

I remember clearly being conscious just before the surgery and the cold metal trolley they put me on. I remember thinking just before they knocked me out that I was ready not to wake up again; I was prepared for death! I remember being very calm but I also remember fighting to breathe!

Mr Levins later recounted that when he opened me up he found I was bleeding profusely from a badly banged up right kidney. The bleeding had filled my abdominal cavity and that I was not only slowly bleeding to death, but also suffocating to death. The movement of my diaphragm was getting increasingly limited.

The rest of his team wanted to remove my kidney but since Levins knew me, he resisted and told them he was willing to go in again if the bleeding did not stop. He also considered that I was still too young to lose a kidney which he felt could be avoided and that I was very fit at the time. I was still actively playing rugby during that period. After cauterizing whatever larcerations he could and cleaning up the blood, he closed me up. That was when the waiting started as the bleeding continued.

It was my father again that came to my salvation as he got his friends in Ipoh to troop in personnel from the police field force brigade stationed at Ipoh to donate blood. After 3 days and 17 pints of blood transfusion the bleeding stopped.

I was to remain in hospital for more that 2 months with painful penicillin jabs twice daily as infection would have caused real problems. It was again my parents that made my stay at the 2nd/3rd class ward bearable as I never had to endure government hospital food when I recovered enough to eat. My meals were catered from a nearby coffeehouse. It would have cost my father money that he could not afford.

As I think back, I feel a sense of remorse that I took my parents for granted during that episode. What they went through was equally if not more traumatic; for me, I could have been just snuffed out and that would have been the end.

My father's performance under severe pressure remains a great lesson for me and that lesson has seen me through many upheavals in my own life ever since.

Email ThisBlogThis!Share to TwitterShare to FacebookShare to Pinterest
Labels: History-Personal

Hi Mr Cheah,
Reading this post is like hearing it from you, I can visualize the expressions you would have relating it. The suffering you and your parents gone through were so vivid still in your mind. It reminds me of you telling us about your good memory.

Thanks for sharing, it is always beneficial reading your blogs.

Thanks Sam, really appreciate your empathy. I wrote it as it was.

This is just one of the stories relating to encounters with death that I have experienced. There are a few more painful occasions leading up to Lady Jade's passing. I will try to post this series in due time as I see it as a form of personal therapy. I am finding it so difficult to get over the loss of my Darling Jeannie.

Thank you so much for sharing, Mr. Cheah.

Love never fades or dies and coping with the love of one we love deeply is a very painful experience...The memories do not fade - only the edges of the pictures are blurred through time that reminds us of how much we were loved, how much we still love.

Indeed writing about it is a cathartic experience...and part of the healing process of pain...

Take care and God bless you and yours always.