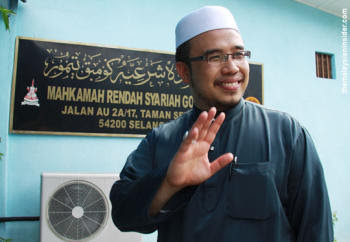 Today, former Perlis mufti Dr Mohd Asri Zainul Abidin was charged in the Gombak Syariah Court here with teaching without a permit. He was charged under Section 119 of Selangor Islamic Administration Enactment and expectedly he pleaded not guilty. However, if convicted he can be fined up to RM3,000 or imprisoned up to two years.
But there is more than meets the eye. Who or what is actually on trial here?
This is a case between the country's powerful traditionalist ulamas and Muslim Malaysia's more progressive preachers. It will be watched closely by Muslims in the country many of whom feel (albeit mostly privately) that the government's policy of "penerapan nilai-nilai Islam" over the last three decades has given rise to many religious bodies wielding unjustifiably huge powers over their daily lives. The chastising of Muslims for practising yoga and girls for adopting tomboyish looks, comes to mind.
Could this case be signalling a watershed?
This was in today's Malaysian Insider.

Asri: I will continue preaching
KUALA LUMPUR, Nov 18 — Former Perlis mufti Dr Mohd Asri Zainul Abidin said he will continue preaching and campaign for the abolishing of the law that requires preachers to get certification from the state.
“Times have changed, if I cannot teach the usual way, I can go to the Internet or I can go to the newspapers,” said Asri, who was charged this morning in a syariah court for preaching without a permit.
“Whenever I have the chance to speak on Islam I will do so, if they stop me then maybe I won't mention the word Islam,” he said.
Earlier, he pleaded not guilty to the charge. He was charged under Section 119 of the Islamic Administration of Selangor which carries a fine of up to RM3,000 and imprisonment of up to two years.
“This will not stop me from delivering the message... they think this is a small matter, they think they can just stop people from teaching, but for me this case is very significant,” Asri told reporters outside the court.
The controversial scholar was arrested by the Selangor Islamic authority (Jais) some two weeks ago while giving a private lecture at a friend’s residence in Ukay Heights.
Asri, who was a university lecturer until his appointment as Perlis mufti in 2006, is noted for his unconventional interpretation of Islamic principles which often contradict government-endorsed doctrines.
He continued to be an influential Islamic scholar after ending his service as the Perlis mufti late last year.
Various leaders from both sides of the political divide, including former premier Tun Dr Mahathir Mohamad, a known supporter of Asri's, have condemned the arrest.
Several Selangor Pakatan Rakyat (PR) lawmakers also attempted to condemn Asri's arrest at the state legislative assembly but the Selangor executive councillor in charge of Islamic affairs Datuk Dr Hasan Ali defended the action taken by Jais.
This morning, dozens of people accompanied Asri to the courtroom. Former Perlis Mentri Besar Datuk Seri Shahidan Kassim was also present.
Posted by KS Cheah at 12:13

Email ThisBlogThis!Share to TwitterShare to FacebookShare to Pinterest
Labels: Celebrity, Excerpts, In The News, My Country, Politics, Religion, Socio-Political, Trawled From The Net

Our politic in Malaysia is getting worst. Haih!