There is hardly any way to prepare for this. Is this the true End of Days predicted for 2012?

This series of videos should be able to show us in some clarity what the world is abuzz about:


How the US Dollar will collapse:

Imagine if all currency becomes worthless overnight...what do you have left to barter with?


On a lighter yet serious note:

Email ThisBlogThis!Share to TwitterShare to FacebookShare to Pinterest
Labels: Trawled From The Net, Values 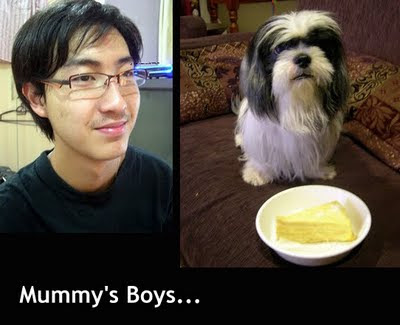 
Check out his blogpost:
http://jiejuan.blogspot.com/2011/08/never-knew-this-day-would-come.html 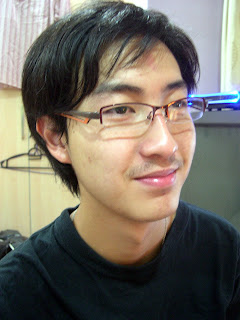 Email ThisBlogThis!Share to TwitterShare to FacebookShare to Pinterest
Labels: J.J.

Most dogs will rush to eat the cake rather than pose for a photo first. But then, most dogs are not like Prince who does not think he is a dog and justifiably so! 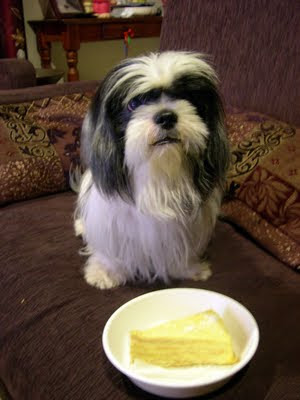 Email ThisBlogThis!Share to TwitterShare to FacebookShare to Pinterest
Labels: Prince

Where can Luis Suarez take Liverpool this season? Nowhere...if the defensive leaks are not plugged.

A direct salvo aimed at Najib? IJ is obviously the driving force behind Najib's transformation plans and implementations.

Pot calling kettle black? I can hardly make sense of Idris Jala's PowerPoint slides myself but Khairy Jamaluddin who makes some sense this time, what track record has he got? Does this dispel rumors which were floating around when Sleepy Head was PM, that KJ was behind Air Asia? Well, maybe not. So many questions these days with nary a straight answer.
This was in The Malaysian Insider.

By Shannon Teoh
KUALA LUMPUR, Aug 9 — Khairy Jamaluddin ridiculed today Datuk Seri Idris Jala’s track record during his tenure as Malaysian Airlines Bhd (MAS) boss as well as the minister in charge of Putrajaya’s Performance Management and Delivery Unit (Pemandu).
The Umno Youth chief posted on micro-blogging site Twitter that “running a beleaguered premium flag carrier needs more imagination than being able to give a slick ppt presentation or unbundling its assets.”
“I think one of Idris Jala’s best career move was leaving MAS to become Minister. He didn’t actually need to run MAS beyond ‘turnaround’,” the Rembau MP added, referring to questions raised over Jala’s record as MAS chief executive.
The imminent share swap between the national carrier and thriving budget airline AirAsia has cast the spotlight on Jala’s four years at MAS.
After being appointed to the position by the Barisan Nasional (BN) government in 2005, he implemented a turnaround plan from a nine-month loss of RM1.3 billion in 2005 to a record profit of RM850 million in 2007.

But Khairy’s (picture)tweets today reflected criticism levelled at the minister in the Prime Minister’s Separtment, that he achieved healthy figures through asset stripping, a strategy that he has repeated as part of the administration’s Economic Transformation Programme (ETP).
The ETP, which aims to double per capita income by 2020, will see “non-core” government and government-linked-company assets being divested, a move some say reflects the Treasury’s need for additional cash.
“While we’re on IJ, Pemandu officers should not be briefing re latest NKRA KPIs. Should be the Ministers. Accountability. Pemandu unelected,” Khairy said, an apparent reference to criticism that Jala’s unit has taken over operations in the Najib administration.
He also said that as Jala could not save MAS operationally, the government should not rule out any candidate to take over as chief executive from Tengku Datuk Azmil Zahruddin, who replaced Jala in 2009.
“Can’t rule anyone out. Even pilots,” he wrote.
The state-owned airline has already had two rights issues since Jala took over, raking in RM1.6 billion in 2007 and RM2.67 billion in 2010 to fund its operations and fleet purchases.
Industry experts said that a further injection of cash will not save MAS as “operational fixes” are required.
Most recently, it recorded a first-quarter net loss of RM242.3 million against a profit of RM310.6 million in the same period a year ago.
Posted by KS Cheah at 14:58 1 comment:

Email ThisBlogThis!Share to TwitterShare to FacebookShare to Pinterest
Labels: My Country, Politics, Stupidity, Trawled From The Net

A brilliant comment by MN Taib in my Tigers EGroup about that 8TV advertisement. Please read:

As Paddy Nordin said that the advert from Grand Brilliance was really stupid (Grand brilliance, my ass). What is even more stupid is making mountains of Pamela Anderson's tits, as it were. Utusan Malaysia is making a racist "pig's b'fast" out of it.  We are, today, in a hysteria mode, and it does lower the morale of those who believe that the Malaysian plural society is a fait accompli.

The JAIS raid accompanied by the PDRM was the height of stupidity. It was impulsive, like a drunk from Ole Scool Pub in Jalan Gasing. The OCPD who approved the allocation of his policemen to the task must be mad. No research was done, and only to discover that the dinner was for a HIV/AIDS charity.

Episodes like the above are very divisive for our interaction in the multi-religious milieu that we live in.

These unfortunate blunders emanate from Dr. M's and DSAI's ill-conceived "penerapan nilai-nilai Islam" - It drove the Malays retrogressively way back beyond Siput Sarawak, Saloma, Kasmah Booty and Romai Noor. There's so much asininity, and lack of thinking. Everything the Agama people does is reaction. We now have a parallel civil service of the offices of Agama Islam and the civil service based on the old Brit system. The Agama officers are flexing their muscles, and as I see it, nobody has the moral courage to discipline them. The efficiency of our civil service is eroded by the lack of understanding of the English Language. Have you heard of the expression, " buta huruf"?

Anyway. I shall carry on as usual with my Christmases and New Year celebs, and I shall osculate lovingly the bird that stands under my mistletoe.
Posted by KS Cheah at 21:42 No comments:

Email ThisBlogThis!Share to TwitterShare to FacebookShare to Pinterest
Labels: My Country, Racism, Tigers

The Weak Should Not Fast?

I do not know if this video is now banned but since it is freely available on You Tube, I suppose banning it would be as silly as airing the advert in the first place. But one never knows for sure these days.


Anyway, as I have said before, if there are more Muslims like Art Harun there would be more Muslims. In his latest blogpost he says everything I wanted to say on the matter. Please read:

By now, many of us would have been aware of the “public service” advertisements which have been pulled out by 8TV.
For those who have not seen it yet, the  awesome “public service” advertisements could be accessed via a Malaysian Insider report yesterday.
It is amazing that some people could take leave from their intelligence in full public view nowadays. And we seem to be doing it with the consistency of Datuk Nicole Davids in the squash courts. Syabas.
The thing which struck me was the nonchalant attitude shown by Media Prima chief operating officer Ahmad Izham Omar when the advertisements were creating a storm in cyberspace yesterday. He was reported as saying, on his twitter account:
“Chill guys. Don’t overthink the ads. Its written, produced and directed by a multi-racial team. If you overanalyse, anything will be bad.”
As a media man, he should know that a message driven public service advertisement would at some point of time be dissected and analysed by the very target of those advertisements. And when the advertisements turn stereotyping into an art, surely they will touch on raw nerves.
One does not have to “overthink” about those advertisements to find them offensive and insensitive. The fact that it was produced by a “multi-racial team” does not negate the somewhat insidious stereotyping contained in the advertisements.
The advice to “chill out” was, to me, even more insulting than the advertisements themselves.
Speaking of insult, I am sure many Muslims would find those advertisements insulting as well. How weak are we, Muslims? We would be breaking fast when we see other people eat or drink? Or we would be having a hard-on at a pasar Ramadhan when we see girls in sleeveless tank top showing their arm pit eh?
The ritual of fasting is meant to cleanse not only our physical body but also our soul. We are supposed to be humbled by the experience of fasting. We are supposed to learn the sufferings of those who are not as lucky as we are, those who do not have food and drinks like us day in day out throughout the year as opposed to only 30 days or so a year.
Why are we so weak so much so that we have to ask people of other faith not to drink or eat in front of us? For God’s sake, the Prophet and his followers fought the Badar battle on the 17th day of Ramadhan in the year 624. And here, now in 2011, we seek the non-Muslims’ understanding not to eat in front of us in Ramadhan. Awesome.
I just love seeing how the Chinese-looking girl was portrayed as a greedy person trying to make a pig out of herself with all the food. If 8TV crew could go to one of those hotels which serves the RM100++ buka puasa buffet, perhaps they would see that Muslims too put mountainous amount of food on their plate too which at the end is not consumed.
There are many messages which could be delivered during Ramadhan. Messages about how we all should be moderate in our buka puasa meals; about how we all should not forget the sufferings of those in poverty and those children who have to work on the streets of Chow Kit to fend for  themselves; about how we all should not just think that Ramadhan is all about avoiding food and drink in day time; about how we should all strive to respect each other, to treat each other with good manners and in civility; about how we should all detoxify our soul from greed, corruption, intoxication with all things materials etc etc.
Instead we chose to demean our neighbours and friends with insensitive and almost senseless stereotyping this Ramadhan. Just a few days ago I remember our Honourable Prime Minister preaching for acceptance instead of tolerance. What have the people at 8TV learned from that exhortation?
Well, the advertisements have been pulled out. The  chief operating officer of Media Prima had  reportedly said:
“Ok guys. We’re pulling out the ads. Thank you very much for your concern.”
He followed up by asking:
“And now to more important things... Does a horn section sound better with 4 trombones? Or would just 3 trombones be enough?”
Yes, life goes on, isn’t it? There are much more important things in life.
As for the horn section with 3 or 4 trombones, I would surely hope 8TV is not going to air a programme on it. Because I fear they might just go and inspect some horns on some cars and air their findings.
Posted by KS Cheah at 11:02 No comments: