One And Only Malaysia

So much ado over another slogan. There have been many before "1Malaysia"...Who can forget, "Bersih, Cekap, Amanah", "Work With Me, Not For Me", "PM For All Malaysians", etc, etc...can Malaysians be blamed for being indifferent and immune to meaningless slogan? The following was a conversation in my alma mater eGroup yesterday:

Can somebody please tell me the concept of "1 Malaysia". Does it mean we must agree to what UMNO does for us? Does it mean that Ketuanan Melayu is with us forever? There are 27 million versions. This is the utter stupidity of not knowing the concept of "political community" vis-a-vis "Bangsa Malaysia".Please adumbrate asap and prove to me that you are not an ignoranus.

I know only One Malaysia as I knew it in my childhod in the 1930s as a student in multiracial KE7, then as a multiracial Malayanpre- and post early Merdeka as first a jungle fighter up to 1953 and as a SB observer and professional on the political sidelines as our people argued, quarrelled, disagreed and finally agreed on the concept and fundamentals of a new nation founded on a Constitution that was perspectively fair to a retained monarchy, Malay as the national language and Islam as the national religion and the provision of certain safeguards to assure that the Malay community shall not be marginalised in their own country of origin and yet does not prejudice the interests of other communities.These safeguards could be reviewed after 15 years, extended if necessary or rescinded. The tenets and spirit of our constitution certainly did not intend Ketuanan Melayu type of imbalanced overlordship which had developed in recent decades in the minds of new political warlords. The sad wisdom of Tunku Abdul Rahman inChapter XVII and XVIII in 1969 in his book on "May 13 Before and After" is an indictment of those who wanted to run the communal race too much faster on unnatural steroids which created progress in extreme racial nationalism and new elites and allowed the growth of the bacteria of political power, decadence and corruption which had eroded and destroyed the pillars of progress and achiement. I fought and was willing to die for the Constitution as it once was and in general structure still is for a fair and reasonable Malaysia for all communities and the correction of imbalances irrespective of race.- as so many ex-Edwardians did and so many Edwardians are trying to do, hopefully within the purview od the law and national security where the police has to be more conscious of a more enlightened and broader Malaysian society who better educated can think out of the racial box and the police must begin to think out of old and aged policing box. Of course, the new society must know and understand the limitations of our developing society and that purist expectations must be accompanied by perspective responsibilities and social discipline.

In addition to Tunku's thoughts from his heart quoted above, below is what Tun Razak said at a senior police conference in 1970 after May 13 on what his concept of One Malaysia was: 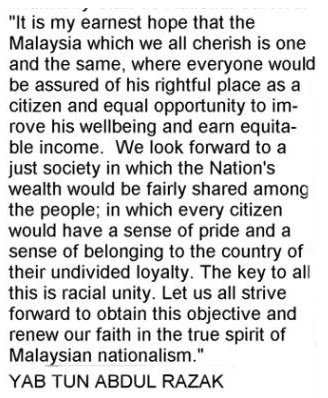 Tun Abdullah Badawai tried in his characteristic persuasive way towards a similar objective but failed because racial entrenchment was too strong within the Party. To some extent those around him was bitten by the same bug of race, opportunity, greed and self. He could only put in place legal measures for the future. Today PM Dato Seri Najib, as Prime Minister of Nation and not just President of Party will face the same problems as all past and future Prime Ministers how they each have to work for community as well as nation and if the excesses of racial community threatens the well being of total nation they have to act as leader of nation or go down as only a communal leader with not enough political will and courage to lead a nation. Will PM Najib have that will and courage to press on. Does he have around him, similar men for courageous nation which actually has to look after community but not imbalanced community and elements of which will ultimately destroy the fabrics of community itself because the reason is actually self in the name of community. WHAT IRONY! Will DS Najib be able to complete what his father could not because death took him too early for nation.?

Yuen Yuet Leng
PS: I have said enough. I have just typed my feelings as the esseance of this is the message not the composition.

I read this thread with a sense of irony and foreboding yet, I feel there is hope for future generations of Malaysians to avoid Malaysia being a failed nation. Both of you have seen the country through the most significant periods in its relatively short history and in your respective distinguished careers, often risked your lives in defense of a concept of nationhood you believed strongly in. In short, you were willing to die for a “Malaysian Malaysia”!

Yet today, in your autumn years and in more than 50 years of nationhood, I sense you feel your “work” is yet undone. You still wonder and are hopeful for the possibility of a truly integrated Malaysian society that was epitomized by what we had in the KEVII of yore. You have swapped guns and bullets for the keyboard and I dare say your efforts have not and will not be in vain.

Most Tigers here are post-Merdeka Malaysians and many have experienced the post-May 13 paradigm shift which created the greed and exploitation that have consumed the nation in the name of nation-building. The nation was lucky it could create more than it consumed up until the beginning of the Abdullah Badawi hibernation. Now we have Najib “1Malaysia” Razak espousing a new slogan. Who can be blamed for thinking, “…here we go again!”?

Today, one thing that any government cannot stop is information flow. This has made a telling difference that eventually determines the government. Malaysia is but a speck but significantly Barack Obama is a product of the ICT Age. His call for real change reverberated in cyberspace long before he actually became President. We have witnessed our little March 2008 tsunami but although a few telling by-elections have come to pass, neither PR nor BN can neglect accountability. I think we will eventually have One Nation and a two-party system with neither being able to rest on laurels; I am hopeful. It can only be good for the nation as most Malaysians now realize in their heart of hearts this nation can only go forward if the people move as One People. Affirmative action by race will have to end and independence of the Judiciary has to be restored. For all his baggage, Najib also knows it; therefore his “1Malaysia”. 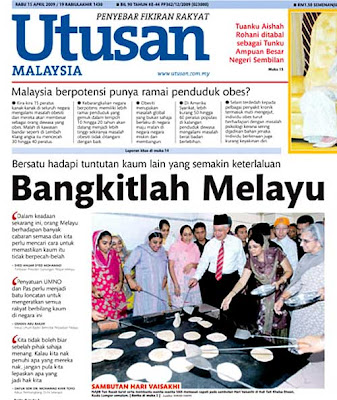 Alas, he has not been convincing so far. Much like his bungling with the release time of the ISA detainees, the timing of his “1Malaysia” speech vis-à-vis the Utusan “Bangkitlah Melayu” headlines, etc, he seems to be struggling with his own machinery. The nation is waiting to gauge him by hearing what he exactly means by “1Malaysia” and making him accountable by holding him to his own definition of the term. His version of “Fourth Floor Boys” seems to be struggling to cope with too much damage control work for now. How else to explain why even his supreme credo seems still a work in progress (see below). Whether Najib is a fake or a genuine leader, his actions will have to speak the loudest or else in three years or so he will be sitting on the opposite side in Parliament. Conversely, our Saudara Anwar Ibrahim who now seems lost in transit will have to be more convincing than he is.

To try to see what Najib wants to mean by his “1Malaysia” the best way would be to check out his “own ‘paid for’ blog”; what an oxymoron. They are now at “1Malaysia” value number 6 (out of supposedly 8) and it appears they are still trying to figure out what should be number 7 and 8! Wishy-washy? You decide! 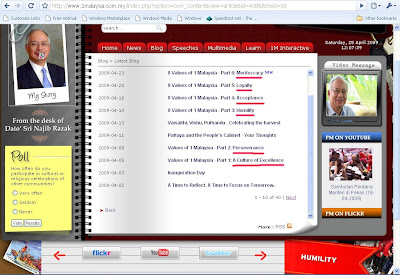 We shall be a little clearer after tonight when we discuss with three scholars - an Indian, a Chinese and a Malay who are passionate about Bangsa Malaysia. Ab Sulaiman has printed his book, " The Malay Mindset"."

1 Malaysia" has no social construct and is as amorphous as Islam Hadhari.

The socio-political problem in Malaysia is not wholly Malay. Hindraf rioters carried Gandhi's photos and the Indian flags. They are fighting for the release of Indian Hindraf leaders from Kemunting but not for all Malaysians incarcerated in our own Guantanamo. Very unclever. Most Chinese start a conversation by saying, " We Chinese......" Chinese ethnocentrism can be a blardy pain in you know where?!!

When a non-Malay calls a Melayu a moderate, it means the SOB gives in to non-Malay habits and puts up kindly to their ethnocentricity. That's the reason why I feel we are a million years from Bangsa Malaysia. Let us become just a Political Community - I have defined it in the past.See you tonight. It will be fun.

P.S. Tigers are roaring like mice on the subject!!
Posted by KS Cheah at 03:04

Email ThisBlogThis!Share to TwitterShare to FacebookShare to Pinterest
Labels: Alumni, Bloggers, Cakap Kosong, Excerpts, Friends, In The News, My Country, Notices, Politics, Trawled From The Net