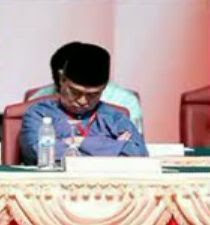 The Preacher Man says the two so-called "reform" Bills (the Malaysian Commission on Anti-Corruption Act and Judicial Appointments Council Act) tabled for first reading in Parliament yesterday should not be seen as a legacy of his tenure. For once, I think our Preacher Man is finally showing some intelligence after 5 years in office; which right-minded PM would want such "dud" Bills to be his legacy? After 5 years of not walking his talk, he should just leave! Well, maybe he is not finally showing some intelligence; the MCAC and JAC make an appropriate epitaph on the "tombstone" for the death of his PMship..."Here lies the dud PMship (2003-2009) of PL, the Father of the dud MCAC & JAC".

MCAC will not have prosecutory powers which will remain with the AG's chambers. It also ultimately answers to the Prime Minister so what is so special about the MCAC la, Pak Lah? Isn't it another weapon for the PM? Without independence and prosecutory powers, the MCAC may well be just another "persecutory" tool for the PM's office.

The proposed JAC will also be under the Prime Minister's armpits so what the heck!?! Whether the PM uses deodorant or not, people will still say it stinks! Tak payalah Pak Lah...

Read the Malaysiakini articles below:

The bills were tabled by the prime minister personally in the Dewan Rakyat at about 11.40am.

He is also seeking for the second and third readings of the bills to be done in the current parliament session, slated to end next Thursday.

In other words, the two bills are expected to be passed by next Thursday.

When he about to table the bills, Abdullah was briefly interrupted by Karpal Singh (DAP-Bukit Gelugor).

Citing the standing orders, Karpal asked House speaker Pandikar Amin Mulia to first consider his motion to refer Chief Justice Zaki Azmi to a tribunal over the latter's alleged confession of corrupt practice while as a practicing lawyer.

The Bukit Gelugor MP, also a senior lawyer, has garnered 56 MPs to endorse his motion, which appeared on the Dewan Rakyat's order paper today.

Pandikar, however, said he saw no necessity to give priority to Karpal's motion.

Meanwhile, MPs will take part in the debates on the MCAC and JAC bills - 75 pages and 23 pages long respectively - during the second reading, expected to be next week.

The two bills were tabled along with four other amendment bills, including those seeking to amend the Judges’ Remuneration Act and Pensions Act.

The premier intends to see the two commissions created as part of much-vaunted reforms he has pledged before he leaves office next March.

Abdullah had announced the formation of the MCAC in April to indicate his seriousness in fighting corruption. The new body, which will have been given substantial powers, will replace the existing Anti-Corruption Agency.

The proposed JAC, meanwhile, will deal with the appointment and promotion of judges, to overcome current perceptions of undue influence by the executive in such matters.

SCC has been dismissed by critics as a watered-down version of the Independent Police Complaints and Misconduct Commission.

It's confirmed - there will be no prosecutory powers for the proposed Malaysian Commission on Anti-Corruption (MCAC), despite numerous calls to make the proposed anti-graft body a fully independent one.

According to the MCAC Bill tabled in Parliament today, such powers will continue to be held by the public prosecutor, who is also the attorney-general. The AG’s Chambers report to the Prime Minister’s Department.

“Prosecution for an offence under this Act shall not be instituted except by or with the consent of the public prosecutor,” states the 75-page Bill, tabled by Prime Minister Abdullah Ahmad Badawi in the Dewan Rakyat today.

There have been many calls to make the MCAC - which will replace the Anti-Corruption Agency (ACA) - a fully independent body by giving it full powers.

The ACA is under the jurisdiction of the Prime Minister’s Department and has long been plagued by allegations that it is not impartial in acting against those involved in corrupt practice, especially those seen to be ‘big fish’.

An official from the PM’s Department told reporters at the Parliament lobby that the prosecutory powers will have to remain in the AG’s hands, as this is stipulated in Article 145 of the federal constitution.

The Dewan Rakyat had been told in May that the government had no plans to give the new body such authority.

Under the proposed structure of the MCAC, the commission will report to a Special Committee on Corruption comprising seven members of both Dewan Negara and Dewan Rakyat. None of them can be a member of the administration.

The special parliamentary committee will examine the commission’s annual report and then submit a yearly report on the discharge of its functions to the prime minister, who will then present the annual report to Parliament.

The head of the MCAC - known as the chief commissioner - will be appointed by the Agong on the advice of the prime minister. The candidate will come from among members of the public service.

According to the bill, the advisory board will comprise seven members who will be appointed by the Agong on the advice of the prime minister. The MCAC chief commissioner will be an ex-officiomember.

“The members appointed ... shall be persons of integrity who have rendered distinguished public service or have achieved distinction in the professions,” reads the document.

The Complaints Committee will monitor the handling of non-criminal complaints against the MCAC officers and identify any weaknesses in the commission’s work procedures.

The MCAC Bill also contains provisions that seek to extend protection to whistleblowers.

Under Clause 65, information will be kept secret by the MCAC officer, while the complainant’s identity “shall not be disclosed or be ordered or required to be disclosed in any civil, criminal or other proceedings in any court, tribunal or other authority”.

The MCAC has been hyped as the Malaysian version of Hong Kong’s Independent Commission Against Corruption, a highly-respected watchdog and role model for the region.

The MCAC was announced by premier Abdullah Ahmad Badawi a month after his ruling coalition Barisan Nasional’s disastrous showing in the March 8 general election.

He said the new anti-corruption commission would enhance transparency and public accountability, amidst public perceptions that corruption is prevalent in certain government agencies, especially the police force.

For all its heralded claims of independence, the proposed Judicial Appointments Council (JAC) will remain very much under the thumb of the prime minister in recommending the appointment and promotion of judges.

Based on the 23-page JAC Bill tabled in Parliament for first reading this morning, the premier will have far-reaching powers from the appointment of commission members to the selection of judges.

He can revoke the appointment of anyone in the nine-member JAC at any time without having to give a reason.

He can also ask for further recommendations if he is not happy with the candidates recommended by the nine-member JAC to fill vacancies in the courts.

Under the proposed JAC structure, the prime minister will have final say on candidates recommended by the commission, when he advises the Agong on the appointment of judges.

All this comes despite the fact that the commission is meant to overcome current perceptions of undue influence by the executive in judicial appointments.

Prime Minister Abdullah Ahmad Badawi, who tabled the bill personally in the Dewan Rakyat, is seeking its passage by the end of the current session next Thursday.

The six functions and powers of the JAC are to:
- select suitably qualified persons who merit appointment as judges for the prime minister’s consideration;
- receive applications from qualified persons for the selection of judges;
- formulate and implement mechanisms for the selection and appointment of judges;
review and recommend programmes to the prime minister to improve the administration of justice; and
- make other recommendations about the judiciary; and
- to do such other things as it deems fit to enable it to perform its functions effectively or which are incidental to the performance of its functions under this Act.

The premier is also empowered to "make an order for the purpose of removing any difficulties" that may arise in connection with implementation of the proposed Act.

1. The JAC will be a nine-member commission that includes the chief justice as the chairperson, the Court of Appeal president, the chief judge of Malaya, the chief judge of Sabah and Sarawak, a federal court judge appointed by the prime minister and four eminent persons.
2. The four eminent persons shall not be any member of the executive or other public service. They shall be appointed by the prime minister after consulting the Bar Council, the Sabah Law Association, the Advocates Association of Sarawak, the attorney-general, the attorney-general of a state legal service or any other relevant bodies.
3. JAC members will hold office for a period of two years and are eligible for re-appointment. They however cannot hold office for more than two terms. They will be paid allowances, not specified in the bill, during their tenure.
4. The appointment of any member may at any time be revoked by the prime minister without assigning any reason. The members can also tender their resignation at any time with a written notice to the prime minister.
5. The appointments may also be revoked on various grounds such as the member being convicted of an offence involving fraud, dishonesty, moral turpitude, corruption or any other offence punishable with imprisonment of more than two years.
6. Members are obliged to disclose their relationship with any candidate under consideration in the selection of judges. The bill defines ‘relationships’ as those of a spouse, former spouse, sibling, uncle, aunt, cousin, sibling to spouse or former spouse and their uncle, aunt and cousin.
7. Members are also required to disclose their connection with any candidate, including their nominee, partner, former partner, spouse of a partner or former partner, a person practising in a firm linked to members and a trustee of a trust under which members or their family are a beneficiary.
8. Failure to disclose their interest with the candidate will make the members liable to a fine not exceeding RM100,000 or imprisonment for up to two years, or both.

On the process of selection of judges, the JAC will meet whenever there is a request.

They must also be in good physical and mental health.

Interestingly, the bill also states that any serving judge or judicial commissioner will not be considered for appointment if they have three or more pending judgments or unwritten grounds that are overdue by 60 days or more.

After making the selection, the commission will have to submit a report to the prime minister, stating the names of the candidates and reasons for the selection.

However, should the prime minister be dissatisfied with the candidates, he can ask for two more names to be selected and recommended for his consideration.

He will then required to offer his advice to the Agong on the candidate, as stipulated under Article 122B of the federal constitution.

The commission is also required to submit an annual report to Parliament, outlining its activities.

The introduction of the JAC was announced by Abdullah a month after the ruling coalition Barisan Nasional’s disastrous showing in the general election on March 8.

It was seen as a move to regain the trust of the legal fraternity after persistent complaints about the way judges have been appointed and promoted.

It has been frequently alleged that senior judges seen as critical of the government have been overlooked in these exercises.
Posted by KS Cheah at 09:20

Email ThisBlogThis!Share to TwitterShare to FacebookShare to Pinterest
Labels: Cakap Kosong, In The News, My Country, Politics, Socio-Political, Trawled From The Net

this is one of the most idiotic bill ever

and at the same time give my middle finger to that guy in waiting, who is currently grinning from cheek to cheek...and say " FCUK you too....!!"